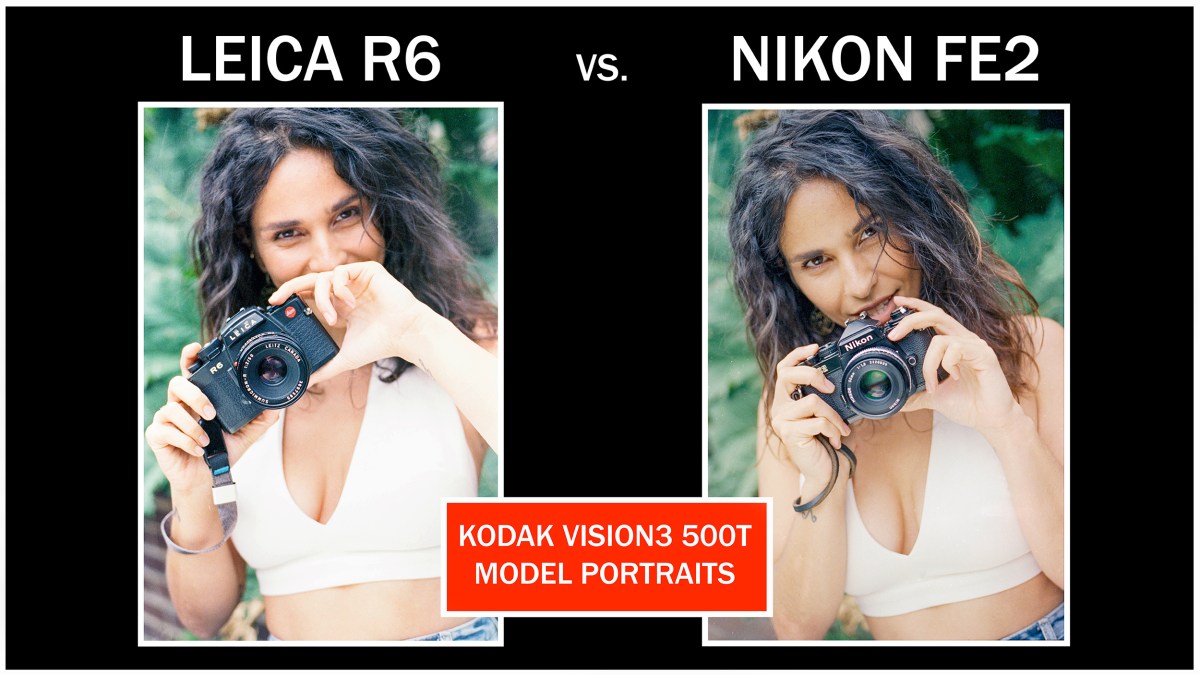 Have you ever wondered if the more expensive Leica R6 camera produces “better” (subjective I know!*) photos than the lower priced Nikon FE2 camera? I was interested for my own photography so I set about organising two model photo shoots where I could use both cameras side by side.

I wanted to keep as many variables as constant as possible to make the results more comparable. All images are shot by myself with my own equipment and I shot the photos one after each other so that the lighting would be constant. I asked the models to try to keep still and hold a similar pose and expression where possible (though it was a normal fun photoshoot so it was not set in stone)(It needs to be fun too!).

Before reviewing the images, if you’ve never come across a Leica R6 SLR camera you may want to watch this Leica R6 review first –

To better understand the process I went through to develop the film for this test, you might first need to understand more about the film that I used. All images were shot with expired bulk roll Kodak Vision3 500T motion picture film. First I had to spool the film to load into the 35mm cameras. Then once the film was developed I had to remove the remjet layer (see the video) before developing. I cross processed this ECN-2 film using my usual C-41 film chemistry as I the results work for me. As the film is expired, I exposed the ISo 500 speed film at ISo 200 to give me good exposure and shadow detail. (From my previous results this works well for my taste).

As mentioned above, all Leica R6 portraits in this series were shot with a Leica Summicron-R 50mm f2 v2 lens at ISo 200 (In camera metering – I use the Leica R6 spot meter not matrix). The 50mm Summicron-R design has a built in slide out lens hood (which I didn’t use) and a recessed front lens element. Leica R lenses are said to render images warmer than their Leica M siblings. This seems to hold true from my results. Perhaps due to the lens design or lens coatings, I saw very little lens flare or loss of contrast in these images.

The Nikon FE2 portraits were taken with the Nikkor 50mm f1.8 version 3 pancake lens, with no hood and the lens set at f2 for all images. The Nikkor glasses looks to give a cooler tone compared to the Leica Summicron-R 50mm f2 lens. This makes sense as the Leica R lenses are known to give a warmer look. Perhaps due to no lens hood and the lens design (a more exposed front lens element), the images seem to show more lens flare and less contrast verses the Leica images.

I know I will state the obvious, but sometimes for us photography GAS sufferers I need to. Both cameras and lenses can take very nice photos and either setup is capable of making both you and the model (in this instance) very happy. The lens is what makes the image (+ the film) not the camera, but you need a camera that lets you focus and meter accurately to complete the task. Different lenses will transform the look of the final images even using the same camera body. Again stating the obvious. Let me break it down into two conclusions –

The Leica R6 is the more expensive camera with the more expensive lens so in theory you would expect it to perform better (based purely on cost)(“Better” is subjective so I expect the results to give mixed comments from readers). We know that cost is usually not directly proportional to performance but the lens showed better flare resistance and higher contrast. The Leica R6 camera lens setup is bigger and heavier than the Nikon with less camera functionality so that is worth noting too.

Despite calling myself MrLeica, I am a big fan of the Nikon FE2 camera too. I went out of my way to find the version 3 pancake lenses used in this test because of it’s performance and close focus ability. I feel Nikon SLR cameras offer exceptional value for money and the lenses available are almost endless. Being a smaller lighter camera-lens setup and lower value it is my ideal SLR setup for overseas photoshoots when I have to pack light.

This is where we may disagree. Most Leica photographers want perfection from their camera(s) (in terms of build quality) but also perfection in terms of image quality. We could class perfection in this test as accurate colours, good contrast and sufficient detail in the images.

But there is a difference between perfect and perfectly imperfect. As a creative who used to paint and sketch before picking up a camera, I like imperfect images often more than perfect. Those ‘happy accident’ photos or end of the film roll photos are often my favourites. And with that said, I prefer the blue hues and lower contrast, and perhaps more ‘grain’ of the Nikon FE2 photos in most cases over the Leica R images. (*Note – see below for more Leica R images with a different lens).

Which camera was the winner for you?

Comment below or on the YouTube video – which camera do you think performed the best? Or I guess I should say, which set of images do you prefer?

Die hard Nikon fans may not agree, but many of us appreciate that the Voigtlander SL lenses in Nikon mount can really improve the performance of your Nikon camera in terms of optically. I realise this is a sweeping statement so here are two videos to back up my comment. First I compare a few Nikon lenses vs Voigtlander lenses and second I share the results from the Voigtlander SL lenses.

Lastly, here are more Leica R6 portrait photos from the same shoot with Jada but this time using the Leica Summicron-R 35mm f2 lens (Not 50mm).

I think the colours vary slightly as from the different scanning sessions (and me adjusting colours by eye). I prefer the these colours with the 35mm Summicron R lens (when the blues are blue), verses those shares with the Summicron 50mm R lens above. The blue top and blue eyes against Jada’s red hair and freckly skin gives a really beautiful contrast. (You might think it was a lucky accident!)(or perhaps just careful planning!) These are some of my favourite images from the day so i’m not saying Nikon is great and Leica is bad.

To see how the Leica Summicron R lenses perform on a digital sensor you can also check out this post. Here I use the lenses on the Lumix S5 camera –

From memory I also shot similar images to these with the Leica R6 and 35mm lens with the Nikon and a 40mm Voigtlander SL lens. That film might still be in the camera as I’ve not seen the images yet. If I find them I will aim to post a part 2! (Leica glass vs Voigtlander glass on the same cameras).

Dream of photographing models but don’t know where to start?

Have you always wanted to photograph glamorous model but don’t know where to start? I can help! I was in exactly the same situation 10+ years ago. (In fact I was worse than that! As an introvert I couldn’t even hold eye contact with a pretty girl back then!)

Join Patreon today to get a taster of model photography plus tips and tricks on editing, lighting, and more! (All for the price of 1 coffee a month!)(Approx).

Book a model photography workshop with me today and we can start to build your portfolio. For those of you in the UK, I organise model photography workshops in London. Photographers living in Europe, I can look to travel to your city once travel becomes easier again. For those of you in the US and further afield, I arrange Zoom call(s) and I will talk you through how to get started with photographing models in the city you live in. (Hopefully I can teach in the US again at some stage as I did in the past! – https://mrleica.com/new-york-photography-workshop-2/ )

Need help with your Film Photography?

Experiencing problems with your film camera(s) or struggling with your film developing? I can help you with that too! Set up a Zoom call with me via Patreon and I will assist! Join Patreon today for film photography support, plus all the other content mentioned above.

Please support my blog and YouTube channel efforts via PayPal if you don’t want to try Patreon! All donations are very much appreciated and help with the running monthly costs.