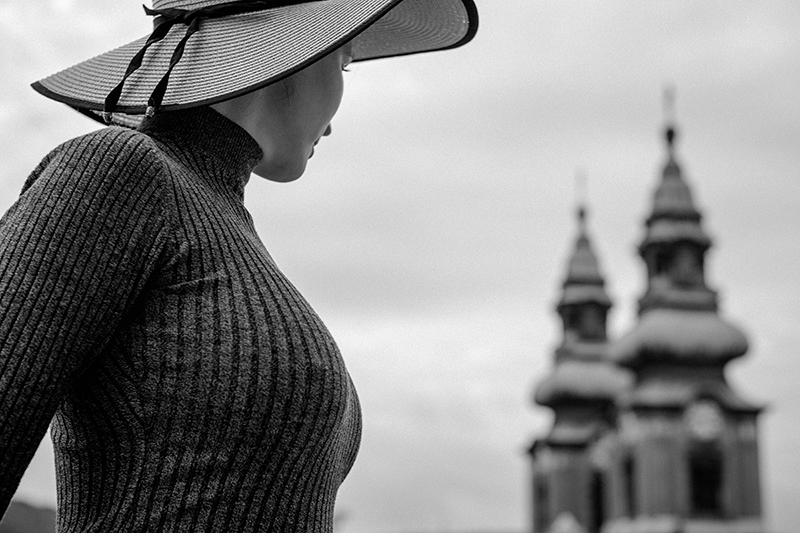 Back from a few days of model photography in Budapest.  I took the Leica CL and 4 more different Leica M mount lenses to play with together a few film cameras and the digital Leica M240 as backup.  The Hasselblad 500cm + Zeiss 120mm f4 Macro-Planar combo was already packed and ready to go then at the final hour (literally 1am when still packing) I changed my mind and swapped it for the Nikon F5 + Tokina 100mm f2.8 macro lens.  Here was the final kit list –

1.3 What Gear I Use for Portraits:

The Mamiya 6 was an after thought as I found I had space left in my main Lowepro Pro Runner backpack. One more camera won’t hurt I thought.

As mentioned in my last Leica CL + Leica lenses post, I found the Leica Summicron 75mm f2 APO and Leica Macro-Elmar 90mm f4 a bit too long on a crop sensor for models.  (90mm Elmar especially).  For this trip I therefore went for shorter focal lengths.  I packed 4 Leica M mount lenses including my favourite Leica Summilux 50mm f1.4, my still loved Voigtlander 40mm f1.4 and Voigtlander 35mm f1.4 sibling and my Leica Summicron 28mm f2 ASPH lens (still need to review it!). Here are each of the M lenses on the Leica CL in turn:

The 50mm Summilux was my first choice as it is my most used lens on the Leica M cameras. I packed the Lux 50mm to use on the Leica CL and Leica M4P.  It’s great for portraits and also for low light. It is noticeable sharper than the Voigtländer Nokton 40mm f1.4 when used on a Leica film camera (especially).  Here are a few CL sample shots with the Summilux 50 ASPH: 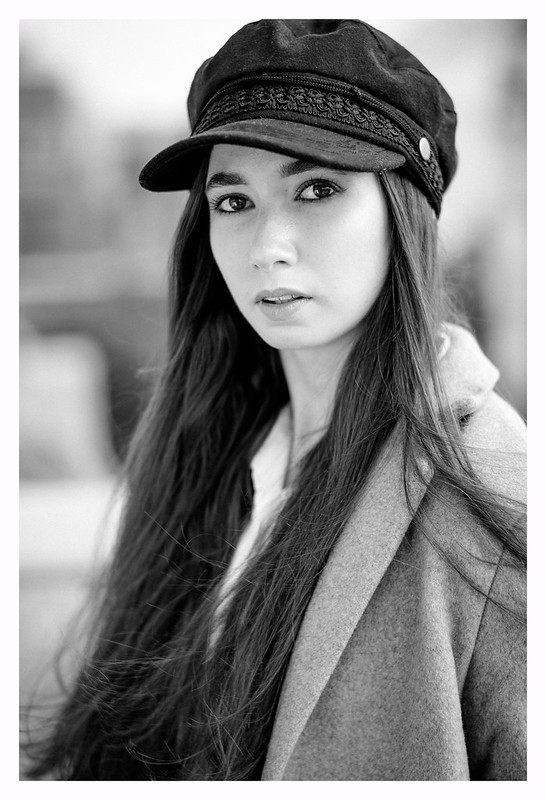 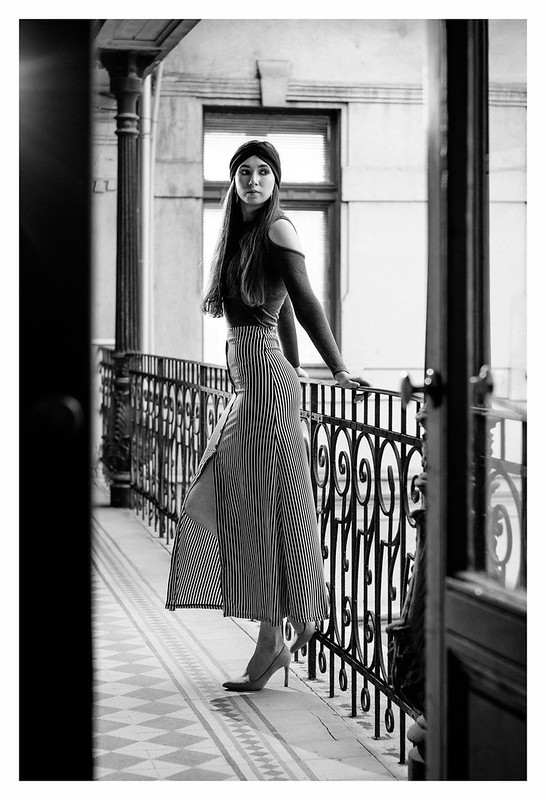 The 40mm was the lens that I say taught me photography. I used it on a Panasonic Lumix G1 when first starting out my photography.  I then bought a Voigtlander Bessa R3A film camera with the same 40mm Voigtländer lens on and that lead me to buying the digital Leica M9.  I love the compact size of the Nokton 40mm and I think it is the best value to performance Leica M mount lens available.  Here are some 40mm photos using the Leica CL: 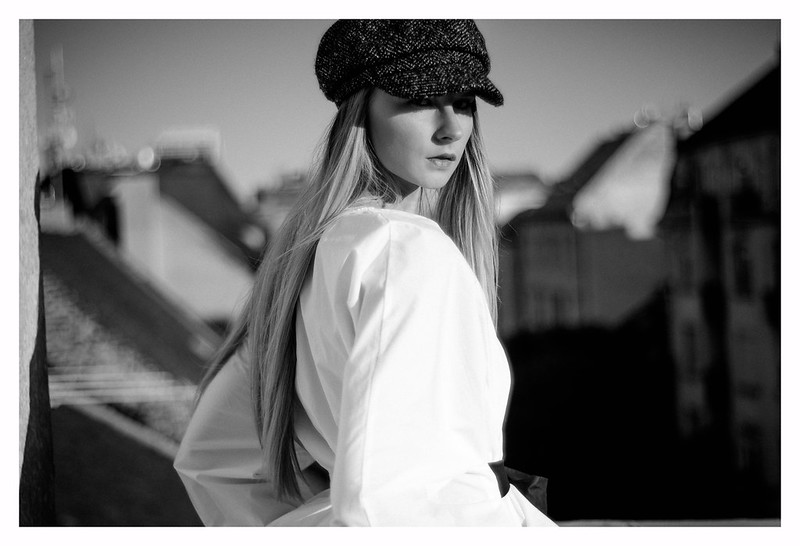 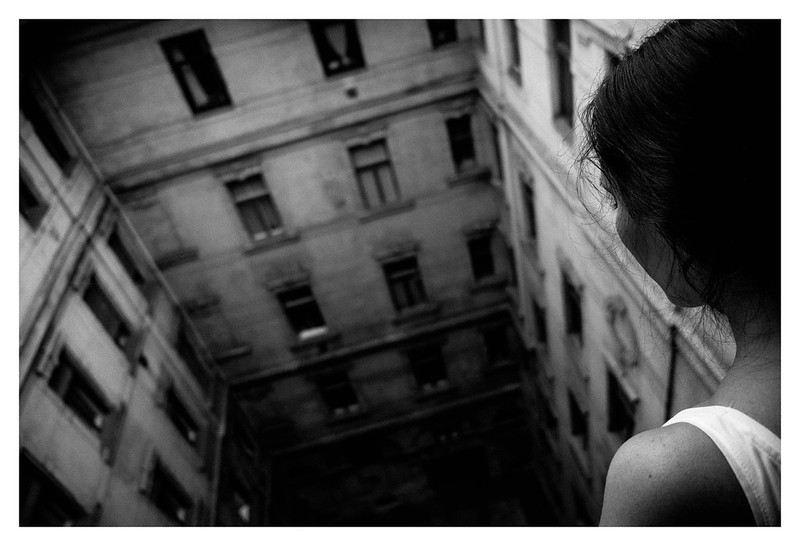 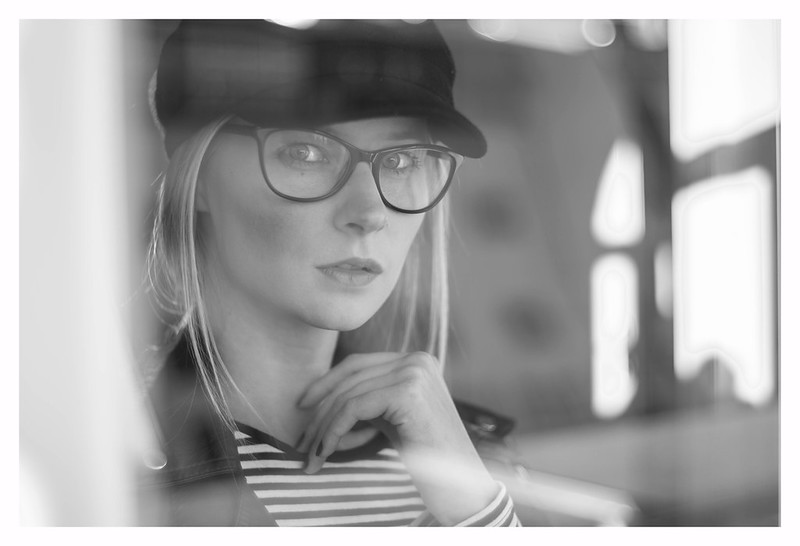 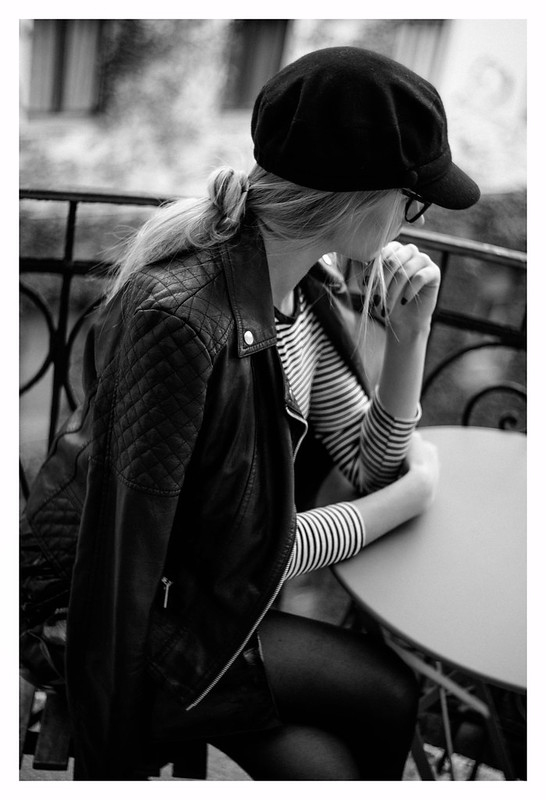 I took the Summicron 28mm f2 lens as I wanted a faster but wider lens option.  My Voigtlander Color Skopar 21mm f4 is quite similar in focal length to the 18mm Leica Elmarit-TL kit lens and not as fast.  The Leica Elmarit-M 28mm f2.8 is also nice and is smaller than the Summicron but I thought an f2 aperture would be sensible for the often low light photo shoots. As with all the M lenses mentioned I also used the 28mm Summicron on my Leica M4P for film photos.  I think I used it on film more the the CL but overall I probably used it the least of the lenses I had with me.  Here is a 28mm Summicron photo with the Leica CL: 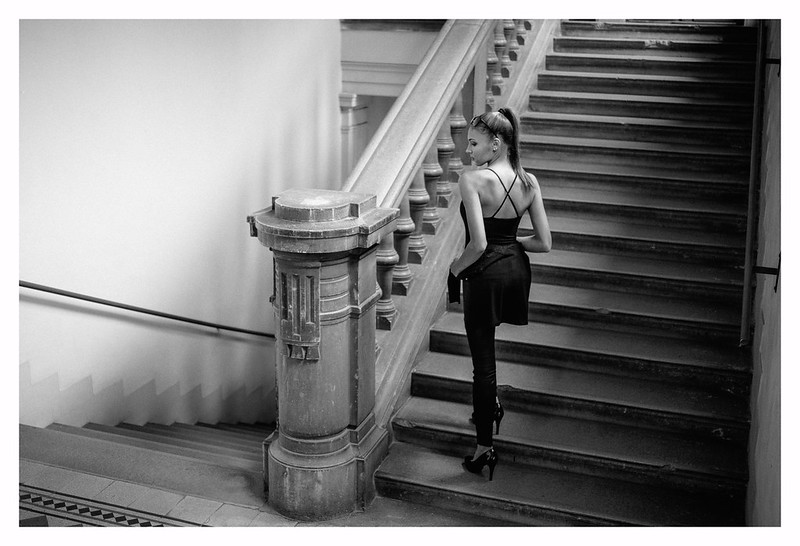 One reason for not bringing the Hasselblad was because in the past I’ve not used the medium format cameras as much due to too little light (Europe in autumn!). I took the Leica M4P to use with fast f1.4 lenses and for wider compositions (28mm-50mm).  I packed the Nikon F5 with Tokina 100mm f2.8 macro lens to use as a longer focal length at f2.8. I then included the compact Voigtländer Ultron 40mm f2 if I was using the Nikon F5 and wanted a wider photo.  The Mamiya 6 needs as much light as a Hasselblad with F4/f4.5 lenses (of those I packed) but I somehow find I use the Mamiya more.

I will share the film photos in a separate blog post (once I’ve developed the film).  I used both the 35mm film cameras roughly equally, the more modern Nikon F5 and the smaller manual Leica M4P.  The Mamiya 6 camera was used the least. Partly as their was not much light (at times) and partly the photos I was seeing just suited rectangles not squares (or I just didn’t feel inclined to shoot big cameras). In total I shot 2 half rolls of 35mm (film to finish already in the cameras)(Kodak Portra 160 and Ilford Pan 100), a roll of Kodak Double-X and 3 rolls of Fomapan 100. For 120 I only shot 1 roll of HP5 with the Mamiya 6 (Poor effort I know!).

Daylight suits some skin better than flash  and indirect sunlight is more flattering than direct sun in these instances. That said I love using direct sun for portraits when I can.

When shooting film (especially) I often shoot with the sun behind me but with the new Leica CL I enjoyed shooting at the sun to flare the lens.  Enjoying this process I then shot all 3 film cameras at the sun too so I’m excited to see the results. This was the Leica CL using available light only at the sun. 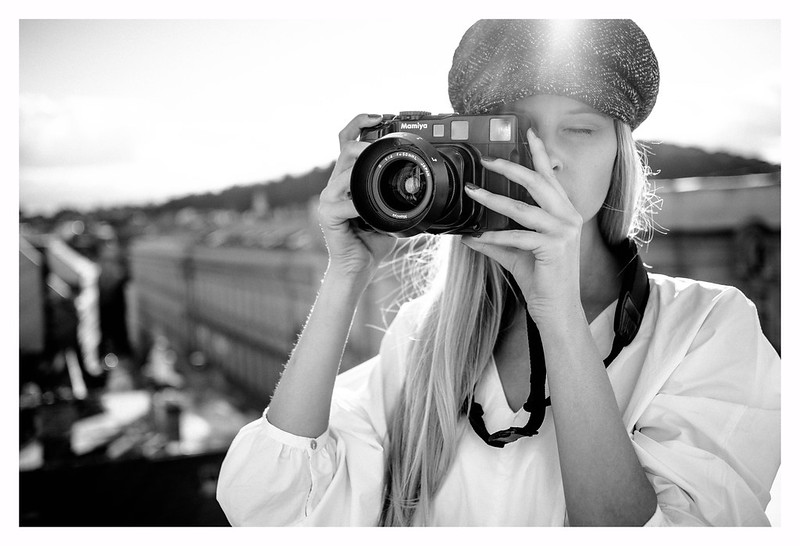 I enjoyed using off camera flash (how I normally use flash) to put light where I wanted it when available light wasn’t quite good enough.

I used available light only for most of the photo shoot on day 1 so had the Leica CL ISO cranked right up as it got dark.  This was my first proper test of the Leica CL ISO above 1600.  I was interested to see how it performed at ISo 6400 and ISo 12800 especially.  I think for me the Leica CL high ISo limit is  ISo 6400 and I wouldn’t go above this where possible.  That said the photo i’ve shared at 12800 doesnt look too terrible considering how dark it was! 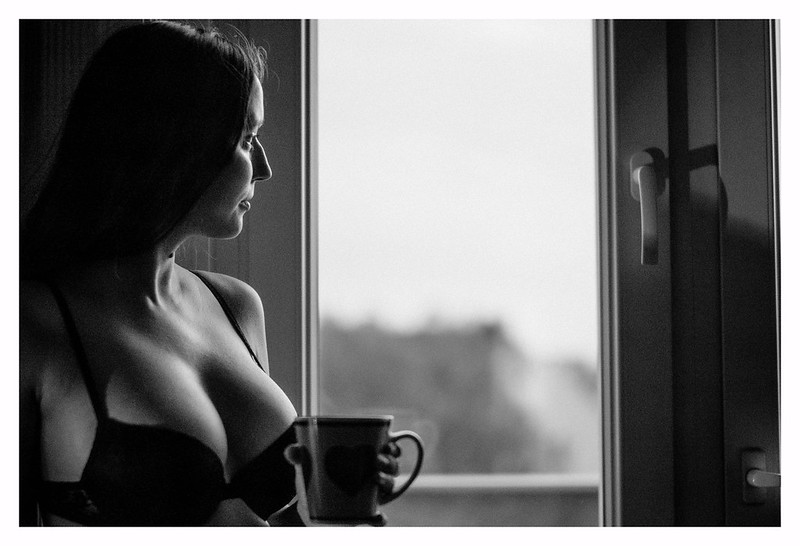 With models getting ever more popular on Instagram year on year, the biggest problem I now have is models never see my messages, or usually too late to respond while i’m in town.  All of my 15 or more usual Budapest models were busy, out of town, overseas on shoots, ill or working.  I had hoped to work with more new faces on this visit but even with NumberOne Models agency sending me a few girls the number of models I worked with was much less than usual.  Not all bad as I desperately needed to catch up on sleep and having not computer to distract me certainly helped!  It also allowed me more time to work with each model on day 2. Day 3 was mostly wasted after 3 cancellations and time wasters.  This is the highs and lows reality of a model photographer!  When it’s good it’s very good but the rest of the time you are on your own.  (That is why i’ve started to do some overseas cycling photography trips too as i’m not limited by models and there is no time wasted).  Both types of photography trip have their up side for me so I look to continue to do both into 2019.

Thanks to the Budapest models I worked with –  Lili who you may recognise and Niki who you probably don’t recognise but I worked with a few years ago.  Thanks to Andrea at NumberOne Models who offered me Eszter and Kata. Eszter a 17yr new model keen on fashion and I tried to make the most of what clothes she brought (then mixed it up a bit!).  Kata another new model and only 15yr travelled 3yrs each way to meet me! Crazy to hear this but lovely to meet you!  You all did great!

The best models after all are those that show up!

I found my Leica CL Lightroom Preset – B&W “Poland 2018” (download availble in the SHOP tab above) suited the bright images shot with Lili.  The darker conditions overall seemed to want a more vintage look of my B&W “High Contrast” LR preset, with less black blacks and a slightly softer look.  I developed a new Leica CL preset B&W “Budapest 2018” which was used for most the images in this article.

If anyone downloads the existing Leica CL 3for2 preset bundle I will email you a free download of the new Leica CL preset B&W “Budapest 2018” used here.  This means you will get 3x B&W LR presets and 1x colour Lightroom preset for only £9.99!  (I use these Lightroom presets for Leica CL camera photos but they can be applied to any photo from any camera).

Despite the many models cancellations and a lot of down time I enjoyed using the Leica CL with M lenses.  My favourite Leica M mount lens of the trip was as expected the Leica Summilux 50mm f1.4 ASPH.  I might not have used it the most on the Leica CL though as film takes priority to digital.  The Summilux 50mm was on the Leica M4P whenever I was shooting Leica film (mostly unless I needed a wider view) and if I wasn’t shooting film I had it on the CL.

Leica CL with M lenses – Which is the best M lens on the Leica CL?

I will do a summary of the best M lenses on the Leica CL after my next trip later this month (from all 3 trips and with 12+ M lenses).

I was happy with the Leica M4P and Nikon F5 cameras and would look to take both 35mm film cameras on the next overseas shoot.  While I’m in the current 35mm film mood I would probably leave the Mamiya 6 behind for the next trip.  The Leica M240 camera hardly got used but it’s good to have as a backup! I could never of predicted how quick I’ve moved from the Leica M240 but i’ve not ruled out the Leica CL honeymoon effect

I still have more Leica M lenses to use on the Leica CL. I should probably try the Noctilux 50mm f1 lens next and the Summicron 90 f2 for some super shallow depth of field shots!  It’s in the diary for October!

Tempted by the Leica CL?  Treat yourself!