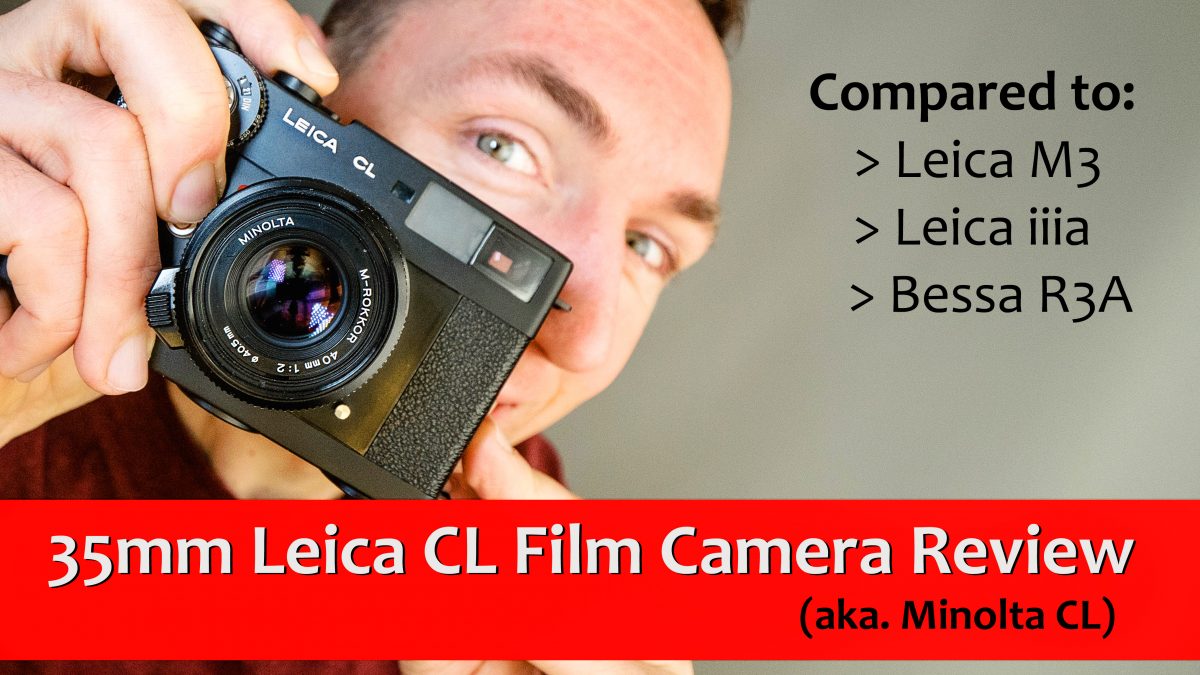 35mm Leica CL film camera review (also known as the Leica Minolta CL camera).  If you are looking for the digital CL see here instead – Digital Leica CL. This article is a comparison of the analogue Leica CL vs Leica M3, Leica CL vs Leica iiia and considers the Voigtlander Bessa R3A camera. YouTube video embedded below.

My first discovery of the 35mm Leica CL camera was seeing one in a vintage camera store in London years ago.  I picked it up as the low price interested me but I put it back. The film Leica CL didn’t impress me enough at the time but my photography has matured since then. Perhaps 5 years later I found myself buying a Leica CL camera on eBay.

This review is based on the Leica CL purchase and compares it to other film cameras -Leica M3, Leica iiia and Voigtlander Bessa R3A.

The Leica CL is different to many Leica cameras in that it was built in collaboration with Minolta. Some of the CL cameras manufactured are branded as Minolta CL or Leica Minolta CL and some, like mine as a Leica CL (or Leitz CL). The Leica-Minolta collaboration is perhaps similar to that between Fuji and Voigtlander when they worked together a few years back. Fuji and Voigtlander joined forces in 2008 to release their amazing 6×6/6×7 folding camera. I have the Fuji GF670 branded version but this is the same as the Voigtlander Bessa iii camera.

OK back on topic..

The Leica CL is unusual in that it is designed around the use of a 40mm lens rather than the standard 50mm focal length. The first Oscar Barnack Leicas were build around a 50mm lens and all the early Leica cameras have a 50mm (or 5cm at the time) viewfinder window only.  This was also true for the first Leica M camera, the Leica M3 which has a 50mm frameline viewfinder as the default design.  Other manufacturers followed and most early LTM or L39 mount lenses were 50mm.  Examples include the Leica Summar, Summitar, Summarit, Summicron, Elmar, Summilux 50mm lenses and similar designs from Canon (especially), Nikon and others. The 50mm focal length was said to be easy to design compared to wider lenses so that probably explains why 50mm became the ‘normal’ lens on most cameras there after.

40mm is an unusual focal length as it is too close to the popular 35mm lenses so most consumers and manufacturers seemed to skip 40mm in their lens lineup.  There are exceptions, the Leica 40mm/ Minolta 40mm (which I will come to), Voigtlander Nokton 40mm f1.4 lens and Voigtlander Ultron 40mm f2 SL II lens (Nikon mount) which I own. There are others such as the Canon 40mm f1.9 pancake lens but generally speaking 50mm is much more common for interchangeable lens cameras.

If you look at fixed lens rangefinder cameras from the same period as the Leica CL (1970s) the opposite was true .  40mm was often the go to focal length for fixed lens cameras as it gives a normal view.  40mm offers the perfect balance between 35mm for say street photography and environmental portraits and 50mm for a tighter portrait crop. Popular rangefinder cameras that favored the 40mm fixed lens design include the Canon Canonet QL 17, Minolta HI-Matic and Yashica Electro 35 GSN (45mm*). I tend to prefer interchangeable lens cameras but these fixed lens rangefinders offer great value for money if you want a cheap 40mm rangefinder camera. The closest camera I have to this is a Olympus 35RC.

The verdict online seems to be that the Summicron- C 40mm isn’t quite as good as the 35mm Summicron lens but it offers exceptional value for money.   The 40mm Summicron is said to be the smallest Leica M lens but I’m not sure that holds true.  Collapsible lenses like the Leica Elmar M is smaller when collapsed.  Some Leica LTM lenses are also smaller and other brands made small lenses such as the Voigtlander Skopar lenses (M mount and LTM mount)(examples – Voigtlander Color Skopar 21mm f4 lens / Voigtlander Color Skopar 35mm f2.5 lens) and Canon LTM lenses.

What you get with this lens is a modern lens coating, mine has a blue tint, in a tiny package with great optics.  The Minolta Rokkor-M 40mm has pleasing audible aperture clicks and looks a little similar to my Leica Summarit-M 50mm f2.5 lens but is smaller and lighter.

When I received my 35mm Leica CL film camera I experienced mixed emotions.  I bought the CL specifically for a small Leica M film camera setup. Compared to a Leica M camera such as the Leica M3 the CL is lighter and shorter length ways along the camera body. The camera width is similar as is the camera height.  Compared to a Barnack Leica such as my Leica iiia the Leica CL is less long but bigger overall and a similar weight.

If like me you are used to Leica M cameras (and more recently for me Barnack Leicas) you probably appreciate these cameras for their beautiful build quality.  The vintage Leicas are particularly beautiful and the Leica M3 is often said to be the best Leica M camera.  I understand better now why the Leica M3 is so nicely built.  It was build during the 1950s period when Leica iii cameras were still in production.  Most people probably don’t release that the M3 was built before the Leica iiig Barnack.

Anyway where was I.. ah yes the Leica CL. So I am used to the best of the best Leica cameras in terms of built quality so it would be difficult for the Leica CL to impress me.  Unlike the precision made all metal Leica M and Leica iii cameras the Leica CL is plastic. It doesn’t feel as light and cheap as perhaps a Cosina Voigtlander camera like the Voigtlander Bessa R3A but it is plastic.

Compared to any other Leica camera I find the the Leica CL film loading very easy. I will record a YouTube video on film loading and link it when I get chance.  I’m used to Leica cameras and I find the Barnack Leicas as easy to load as the Leica M2 or M3.  My least favourite to load are the later Leicas such as the Leica M4-P or Leica M6.    As with all Leica film cameras you should be able to get 38 exposures per roll of film with the CL.

If you are comparing both cameras when would you use each. If I had the choice of Leica M3 vs Leica CL and could only have one camera it would be the M3, no question.

I prefer the Leica M3 for everything except weight. The M3 is quite heavy for it’s size. You will not find a better viewfinder – rangefinder experience than the Leica M3. For precision focusing with fast lenses for my portrait photography I will always chose the M3. If I wanted a Leica for travel photography I would look to take either the Leica CL or a Barnack Leica such as my Leica iiia.

If I could only have the Leica iiia or a Leica CL I would chose the Barnack Leica iii camera. Why? –

If you want a cheap Leica M mount camera the common two options are a Leica CL or a Voigtlander Bessa camera. The Voigtlander Bessa R3A is the closest Bessa to the CL as it comes with 40mm frame lines. It was the Bessa R3A that made me buy my first Leica so don’t rule out this camera. The Bessa R3A kit lens the Voigtlander Nokton 40mm f1.4 lens is also excellent. The Nokton 40mm will mount on a Leica CL body for a fast 40mm lens setup (f1.4 vs the Rokkor f2 aperture).

So not to repeat myself with another Leica CL vs camera X list instead I will share 10 facts about the Voigtlander Bessa R3A.

The Leica Minolta CL and Voigtlander Bessa R3A are both nice cameras with their own pros and cons. If the Voigtlander Bessa R3A rangefinder was less prone to mis-alignment it would be a fantastic camera. The Bessa R3A combined 1:1 viewfinder rangefinder is lovely to use and the LED display light meter gives a modern touch. The Bessa R3A dimensions are near identical to a Leica M but it is light weight. Both the CL and R3A cameras offer 40mm framelines if that is your thing. If you want better build quality in a smaller slightly lighter package get the CL. If not get the Bessa. Some Voigtlander Bessa camera prices have gone crazy in recent years, especially the Bessa R4M.

There are a few hidden gem cameras out there to consider. If you are only looking to buy a Leica CL to get a lightweight Leica lens setup there are alternatives. If you only shoot wide lenses stopped down and just want a super light camera I can help! Check out the Voigtlander Bessa L  if you use LTM lenses – an amazing camera! If you don’t use Leica thread mount lenses look at the Voigtlander Bessa T. The Bessa T camera is a Leica M mount version of the Bessa L.

I must be confess.  I messed up when I bought my CL and was a little disappointed.  My main interest of having a Leica CL was for the 28mm framelines. 28mm framelines in a small Leica camera body for the perfect travel camera.  After reading many reviews on both the Leica CL and CLE I bought the CL. I wanted a manual camera that didn’t rely on batteries to operate so that ruled out the CLE.  The Leica CL is also around half the price of a Minolta CLE which also helped my choice!

Reservations of the Minolta CLE

My main reservations is the Minolta  CLE is an electronic camera that needs batteries to function. I worry about buying a camera where if the electronics suddenly die it’s a dead camera that can’t be repaired (most of the time). One of my Fuji GA645 electronic cameras suddenly just died one day without warning. I much prefer fully manual cameras or as manual as possible. Even the Mamiya RZ67 Pro II can be a pain due to it’s electronics. A Hasselblad 500 camera is better in that regard – nice and simple.

So to conclude. Will you like the Leica CL film camera? If you don’t own any other Leica cameras then probably yes. For those people that enjoy small cameras then yes the CL will probably interest you. If you own Leica M cameras and lenses and want a lighter setup then yes the CL is a good choice. Cost wise the CL is a bargain compared to most Leica cameras, as is the 40mm Minolta Rokkor-M 40mm lens (recommended!).

How will I use the Leica Minolta CL?

I will probably not use the Leica CL film camera for portraits too often and that is bulk of my photography. The CL is a good camera to have for when wanting to travel light and use Leica M mount lenses. If I stop the lens down I could have a killer travel camera setup using the Leica Macro-Elmar-M 90mm f4 lens, the Minolta 40mm and say the Leica Elmarit-M 28mm f2.8 lens. For wider lenses I will probably use the Voigtlander Bessa L camera or the Leica iiia.

Here is the key information about each camera for a quick side by side comparison. There is no clear winner for all categories so it is about using the right tool for the job, or compromise if only using one camera. 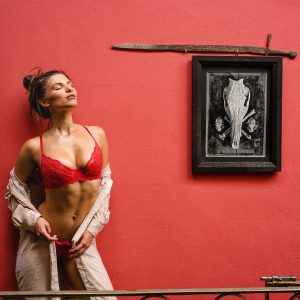