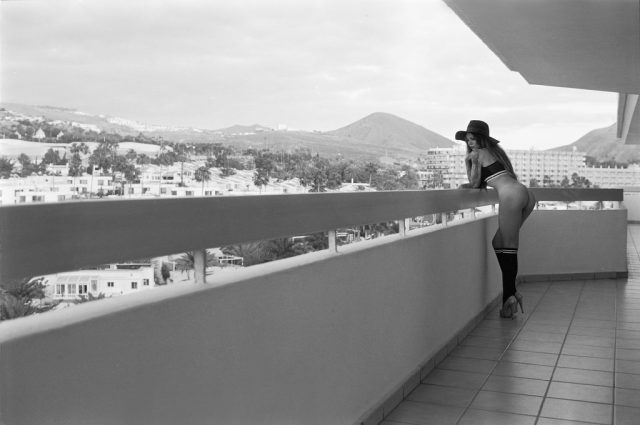 Another blog post I wrote quite a few months ago.. trying to catch up! 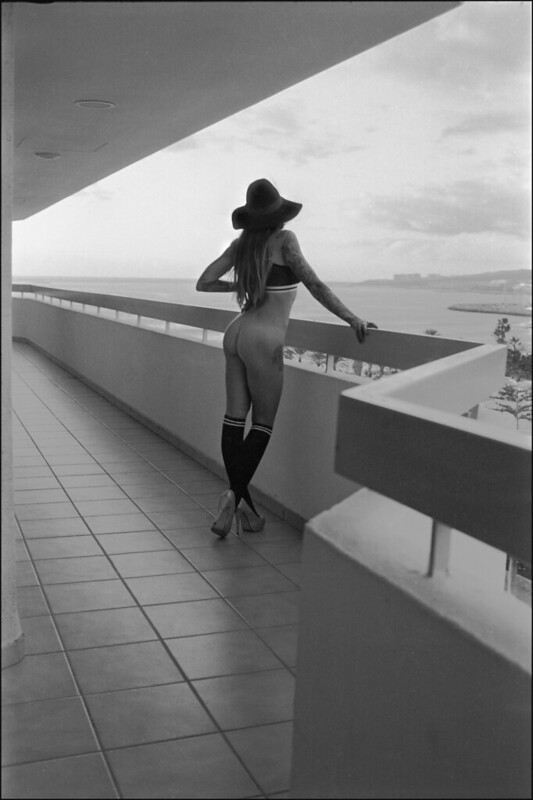 In September 2017 I invited Lindsay (also from Coventry, UK) to fly with me to Tenerife for a few days of model photography in the sunshine (Blog linked below).  We both really enjoyed the experience so booked flights as soon as we got home to visit again in early 2018.   Once we shared our Tenerife photos on social media and said we were going again a fellow local UK photographer that has worked with Lindsay before said he would be interested to join us. To cut an even longer story short we arranged 4 models between us for the next Tenerife photoshoot and there would be two photographers, me and Kev. 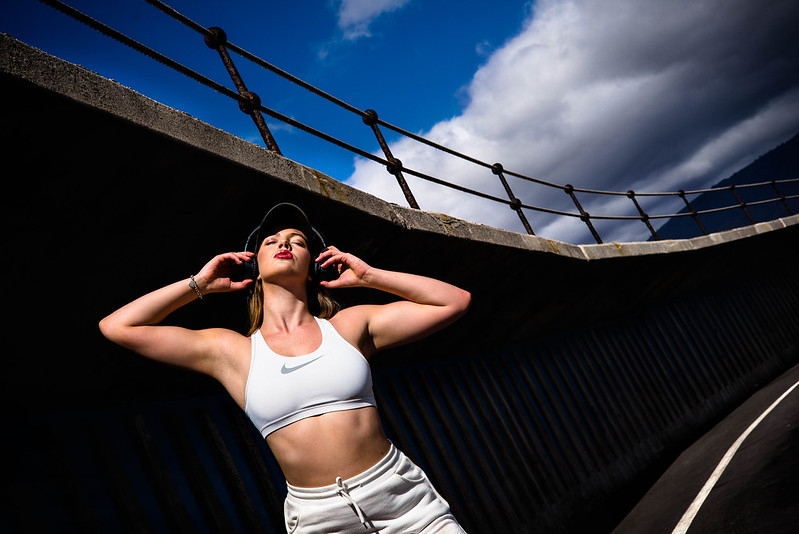 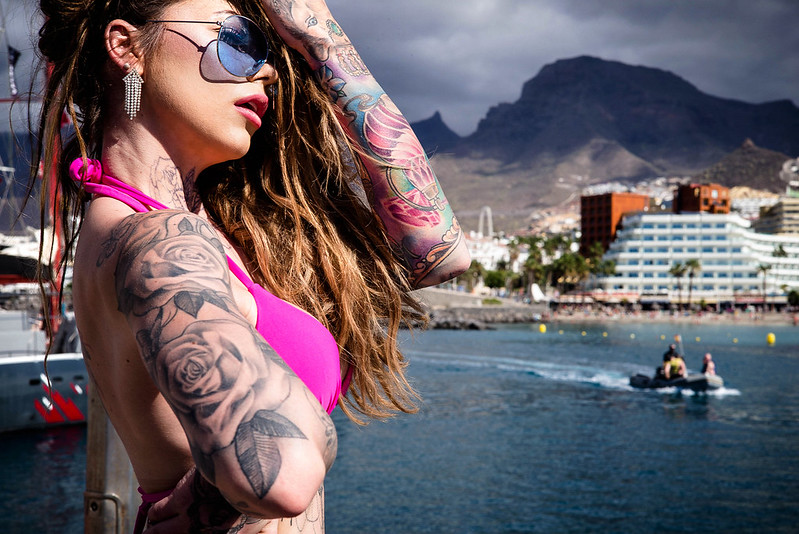 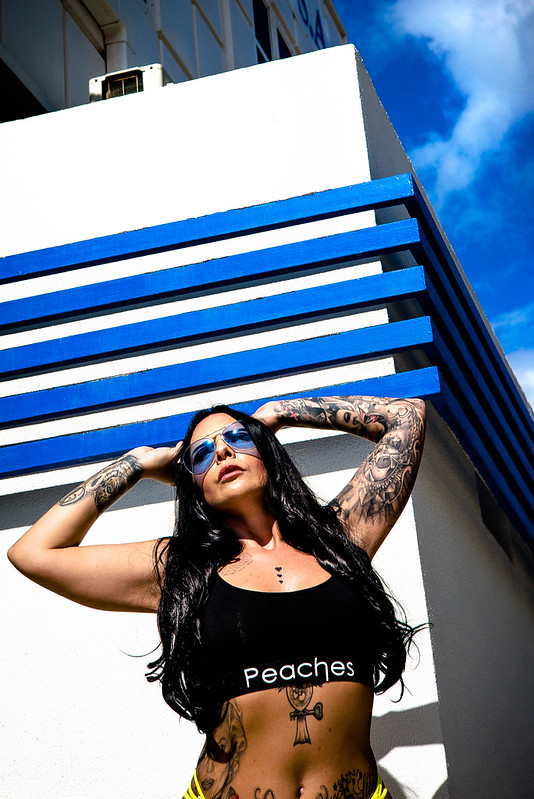 Kev had lived in Tenerife in the past so organized a hotel for us all in Las Americas.  I was not sure what to expect as had never visited the area but I feared there would be too many English tourists. Actually the hotel had a great location close to the beach and with all of us together in one large apartment it was quite social and easy to communicate and plan photoshoots. 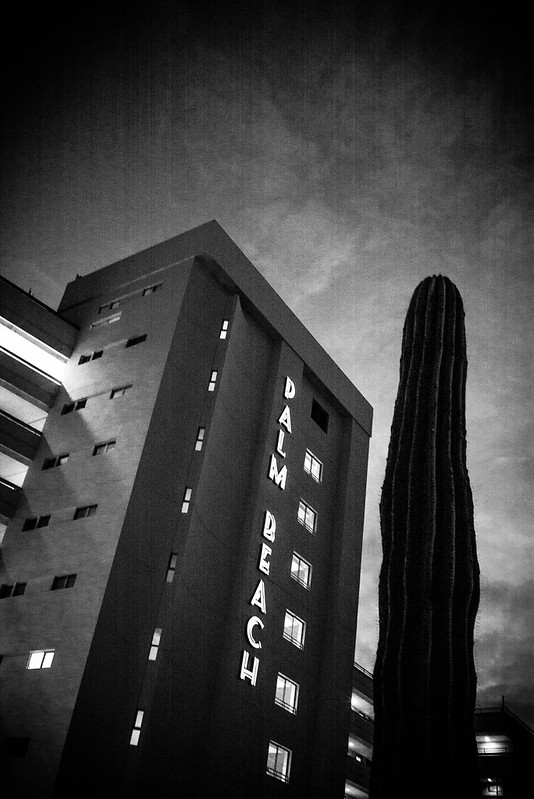 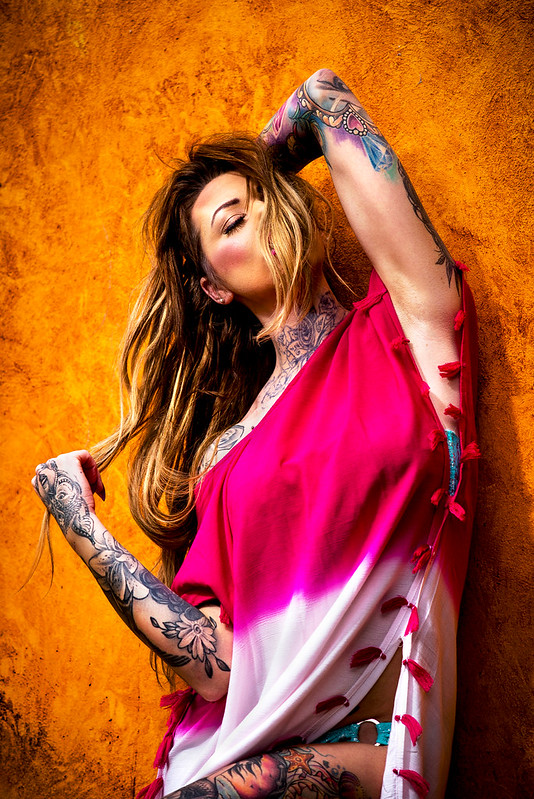 For the first afternoon when we arrived to Tenerife we had a little walk around to look at potential locations for photos. We settled on using a secluded urban area to get some graffiti style photos before it was dark. Being a newly formed group we were all getting to know each other a bit better so probably didn’t make best use of the daylight. Once back at the hotel Lindsay and I still wanted to shoot so we went back out again to take more photos. Most of the photos I took on day 1 used flash so I was less inclined to shoot film.  (I do shoot a lot of my analogue photos with flash but in a fast paced environment I prefer available light)(plus it depends on my taste that day of the week!) 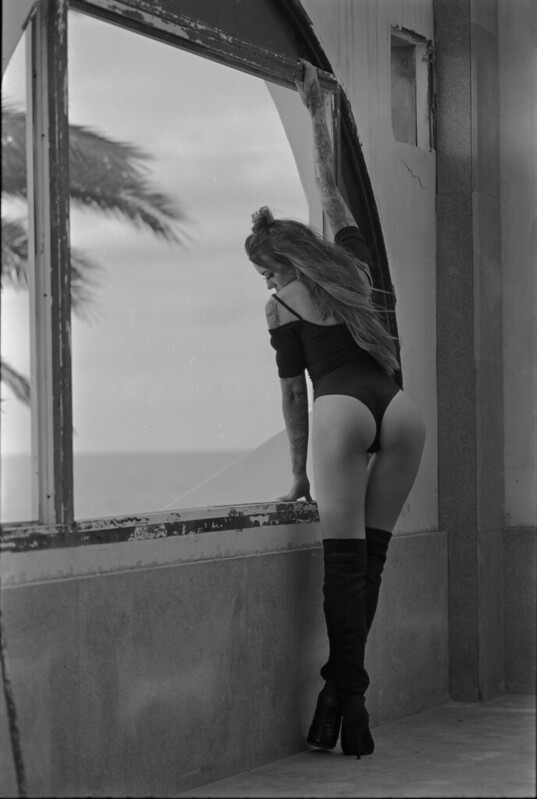 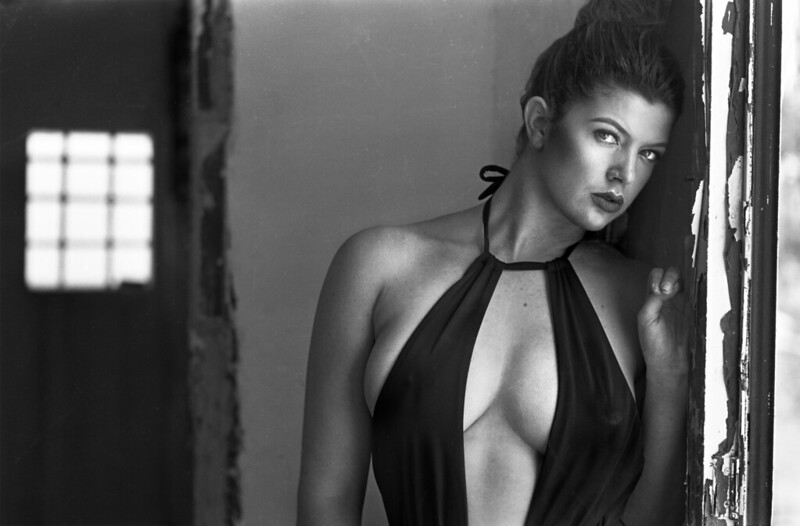 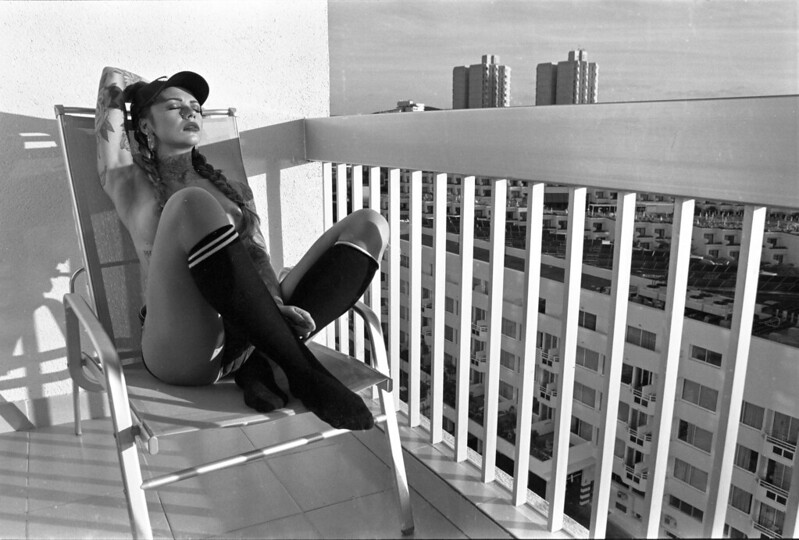 We had broken cloud and sunny spells again during the morning. One of the UK models had fallen sick prior to flying so didn’t travel meaning there was only 5 of us. We found 2 Tenerife models interested in meeting us so the plan was to meet them at 7:30 ahead of a sunrise shoot. Neither local girl showed up at the hotel so we had our usual team of 5 for the morning from the UK. We didn’t get much sun at sunrise so I did all my photography with flash again. That meant again I shot 99% digital photos (if it doesn’t feel right I don’t shoot film).  For the afternoon a contact I had in Tenerife arranged for one of her girls for us to shoot with.  Kayleigh knew the area so made a few phone calls and got us access to a partially build / derelict club that was been renovated.  The workmen gave us full access and worked around us and we got to shoot in a new location and away from the tourists on the main strip.  The models rotated between two photographers and I tried to ensure Kayleigh got the shots she wanted before we had to leave. She was very body confident and relaxed in front of the camera so the resulting photos were a little bit racier than I anticipated. 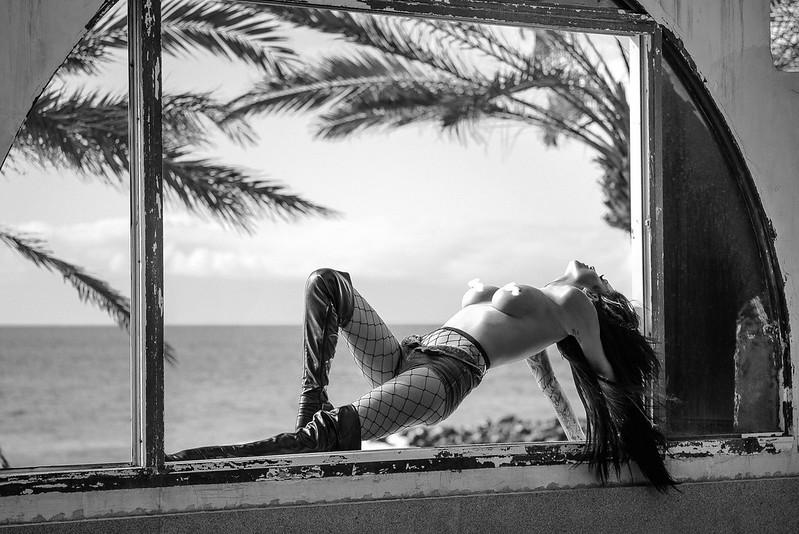 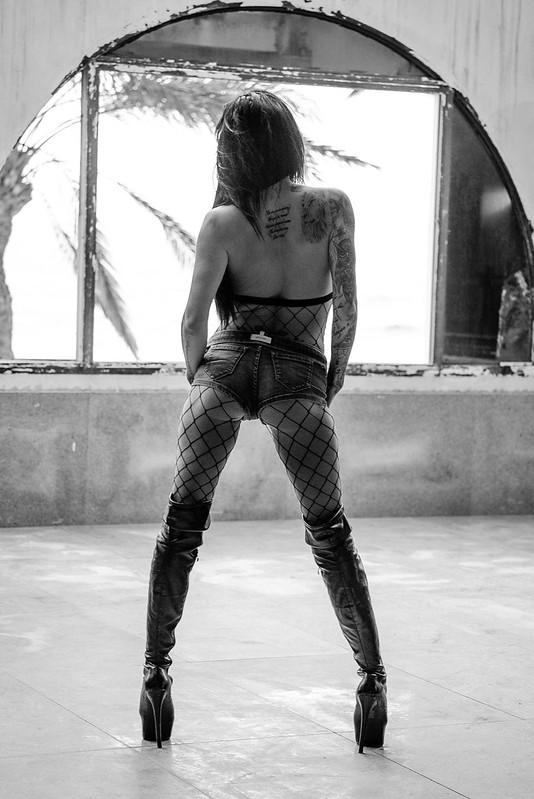 A great experience even if all very hectic as we were working fast and swapping between models back to back. Working fast meant I had to get the job done rather than ‘play’ with film cameras so again almost all photos were digital. By late afternoon we had finished as Kayleigh had to go. Everyone was slumped in a bar both mentally and physically exhausted by the crazy experience that just happened. We had coffees and quick sit down then most people retired to the apartment to relax. Lindsay and I were still keen to shoot again so shot some cheeky shots on the hotel balcony. At last, I managed to shoot  a bit more film!  Next we all headed to the beach for sunset. We arrived too late to use the sun and beach properly but I still did a few photos for the girls. 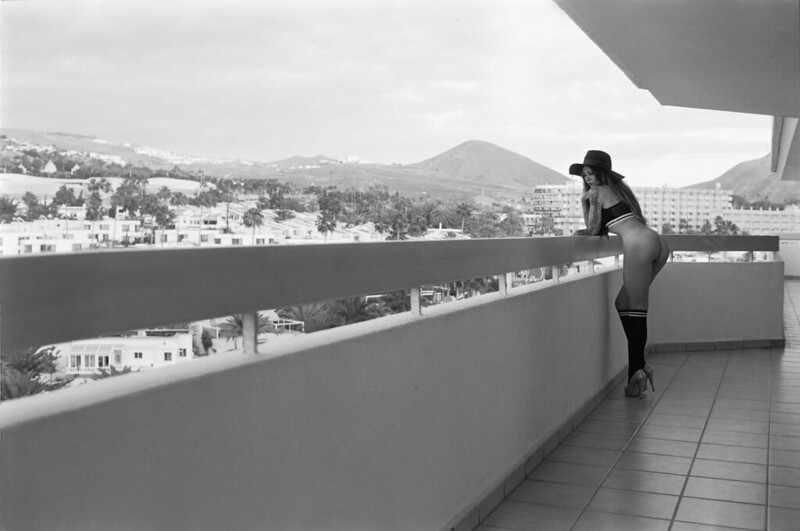 I ran in the morning again before everyone else got up and noticed we had clear skies. I decided to try to simplify things for today and also try to create different looking photos photos. I didn’t take the 90mm Macro-Elmar-M lens for the digital Leica and went with a 50mm lens instead. I put a 35mm lens on the Leica M4-P (Voigtlander Color Skopar) but wished I had taken my 28mm Leica Elmarit-M. My eyes seemed to be viewing wide today.  I put a 28mm Nikkor E series lens on the Nikon F5 so was glad I had that option. Amy was keen to shoot more today so we did a series of images at the hotel on the roof. I was really enjoying working in direct sunlight and managed to fire off two rolls film before we even left the hotel. Yey! Good times. I kept the same setup for much of the day and I really liked some of the images we were seeing on the digital Leica LCD. The last shoot in Tenerife was on the beach at sunset. I finished film in both the Nikon F5 and Leica M4-P and then shot digital until the sun went behind clouds. 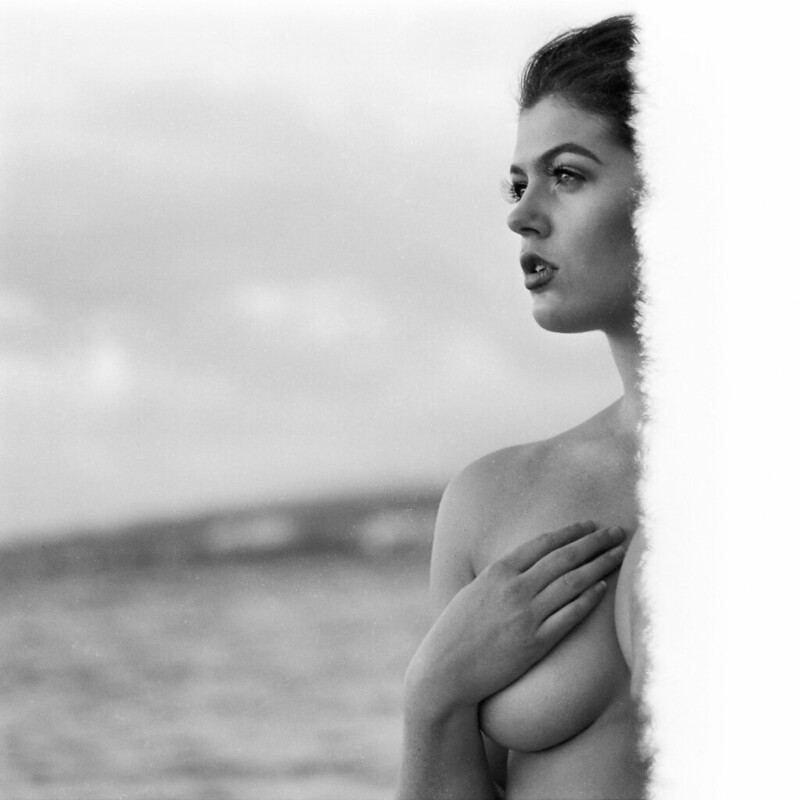 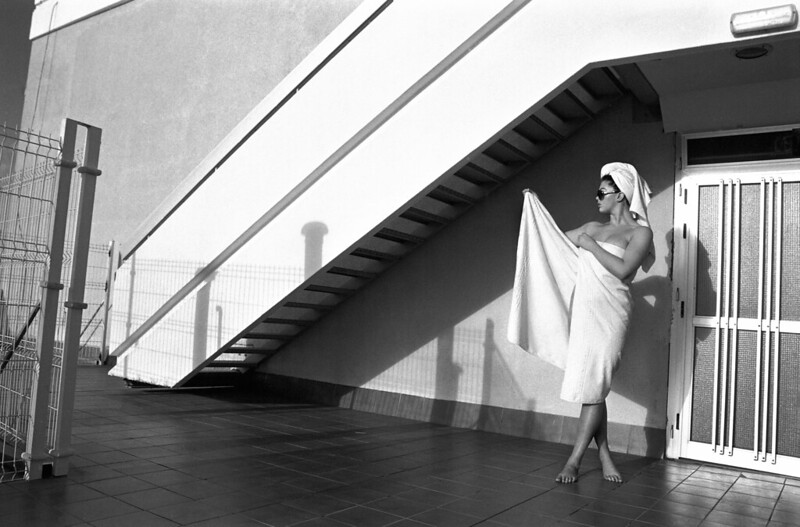 I really enjoyed our Tenerife shoot despite some concerns ahead of the trip. Everyone got on well together, we didn’t have too much downtime between photos, the weather was warm and dry, the location and hotel was better than I expected and the models gave me the opportunity to try new ideas or styles that I may not have shot before.  I think without exception, everyone said see you on the next one so I will definitely be organizing another trip. 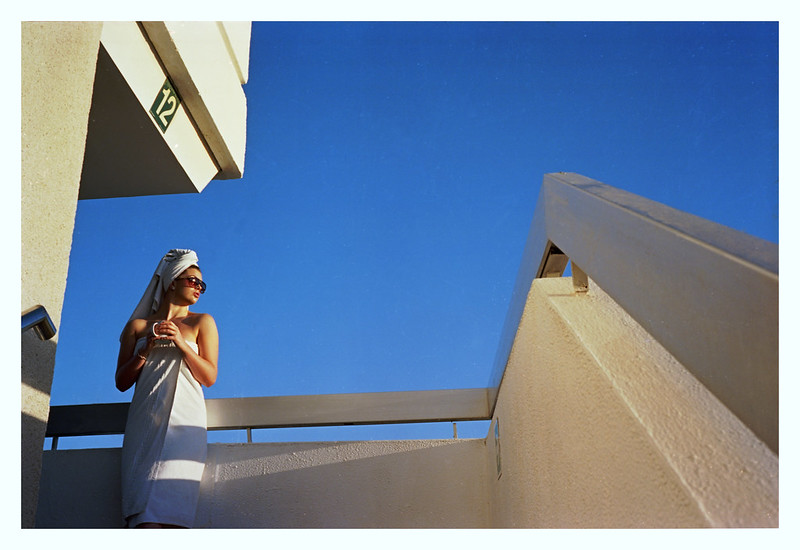 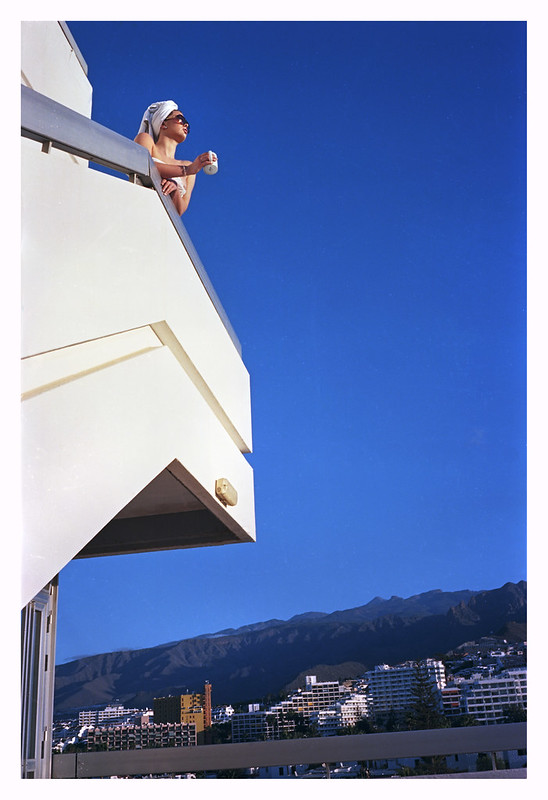 What to do different next time

It is very tempting to travel light without lighting gear next time but then equally I know in some situations I will wish I had it. I will certainly take a 28mm lens for the Leica cameras as 35mm was not wide enough. The Nikon F5 was fun to use but when using the manual focus smaller lenses like the 28mm and 40mm I could have taken my much lighter and more compact Nikon FM camera instead.    Looking forward to the next Tenerife photoshoot already! 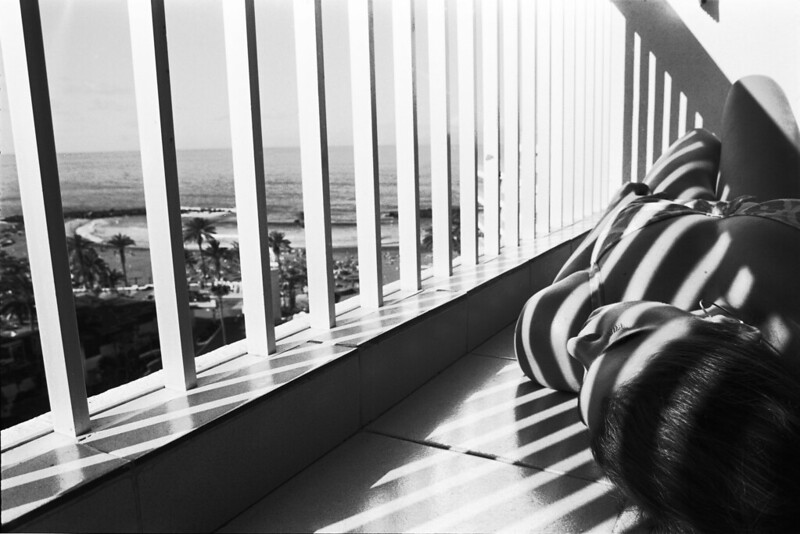 What to do different next time (II)

Most of this blog was written immediately after the trip before the emotions had time to settle.  After have time to develop most of the film from Tenerife (some colour still to develop I think), I feel I work better 1-2-1 than with a group as here.  My style continues to evolve but I think perhaps on the whole the photos from the first trip to Tenerife with just one model might be better (or more specifically more keepers / a more productive trip).  When it is 1-2-1 we are 100% focused and “dialed in” as to the task and nothing else really matters other than good photos / getting the shots we both need/ want.  With that in mind for my third photoshoot in Tenerife I travelled with just one girl.  Polish model Aneta (to follow)! 🙂 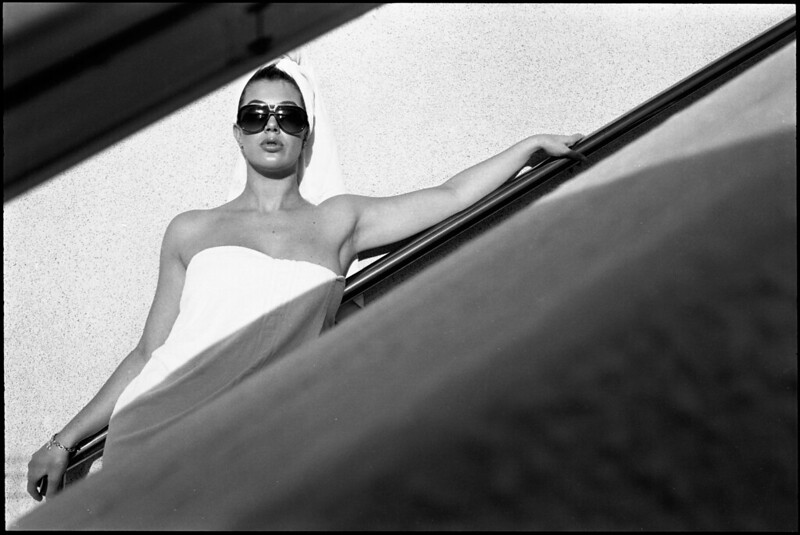 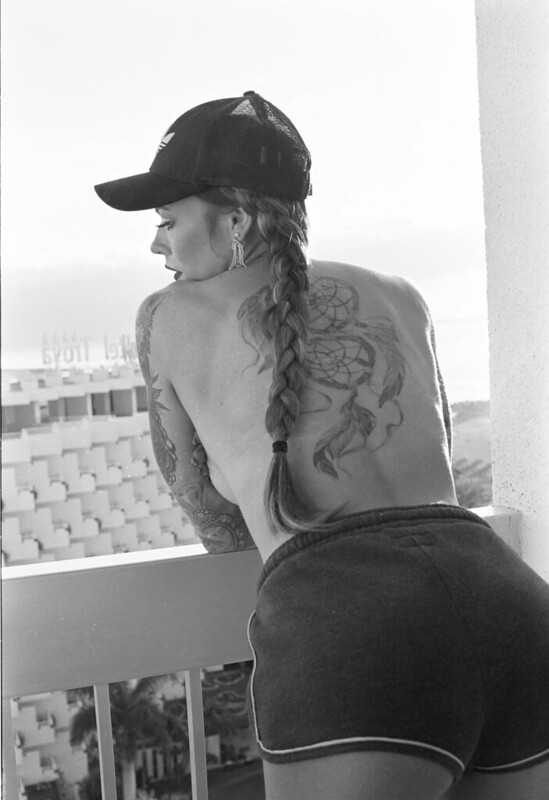 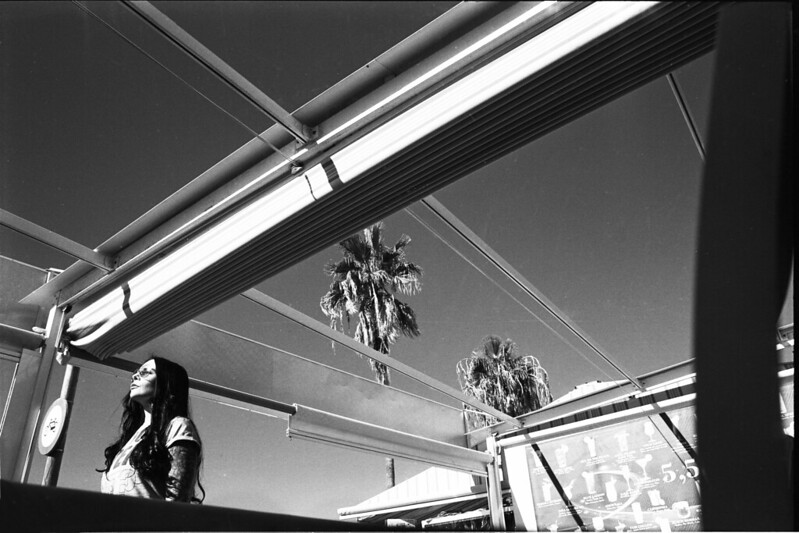