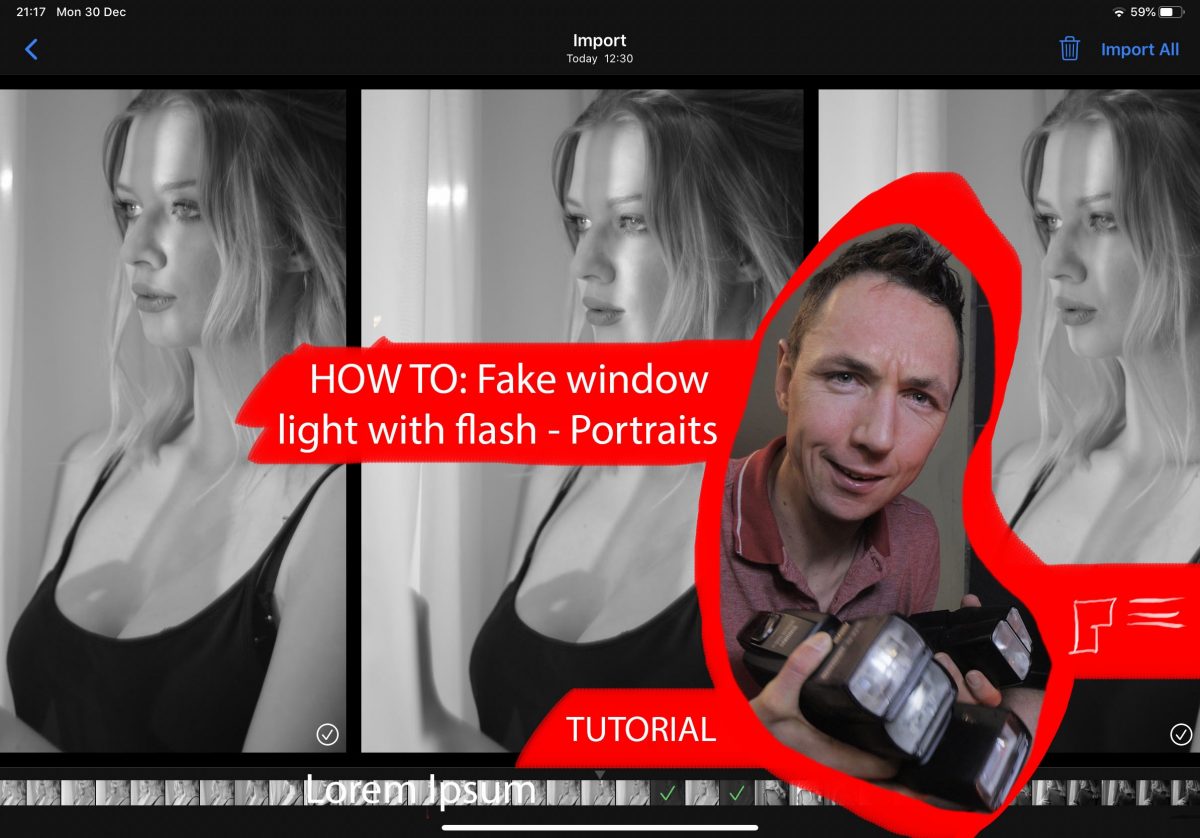 How To – Fake Window Light with Flash (Speedlight Portraits)(YouTube Tutorial)

Do you ever wish you had more light for window portraits? Do you live in a country with limited daylight during the winter months? In the UK there can be insufficient light for my portrait photography on grey overcast days. For this reason I boost the available light with flash (or additional light sources). See below for how I do it.

In this post I will show you how to fake window light with very simple setup. The YouTube video linked below includes lighting diagrams and behind the scenes video during a model portrait session together with example photos.

Digital cameras with high ISO – No need for flash?

It is worth mentioning that with many modern digital cameras you can use ISO 3200, ISO 6400 and higher (on some cameras such as Sony). With such a high ISO you will probably never need to use flash photography. That said, it is a good skill to have to be able to make light anywhere on demand.

When it comes to using film cameras light is much more important than it is for digital. It’s a necessity. The most popular film stocks are ISO 100 or ISO 400. There are then films like Kodak Portra 800, CinesStill 800T for if you need more light (than ISO 100-400). Above ISO 800 you have Ilford Delta 3200 and Kodak TMax 3200 as some very low light film options.

Personally I’m not a huge fan of these high ISO films. The extra film grain created when working in low light can be too much for my portraiture. For this reason I usually shoot at ISO 100-400 and create the light as needed. (Grain can look awesome but I prefer for other styles of photography, when the grain is that apparent.

When I’m not using flash for portraits I often shoot with 35mm film cameras such as the Leica M3 or Nikon FE2. The advantage of the 35mm camera system is you can use fast lenses with maximum apertures of f1.0 (Leica Noctilux 50mm f1.0 lens), f1.2 (Nikkor 50mm f1.2 ai-s lens), f1.4 (Leica Summilux ASPH 50mm f1.4 lens) and so on. I usually shoot with a shutter speed of 1/60 handheld for my portraits as it seems there is always insufficient light. I can’t remember the last time I used 1/125 so I must live under a cloud!

Unlike 35mm film cameras medium format cameras tend to have slower lenses. There are a few rare fast lenses such as the Mamiya 645 80mm f1.9 lens and the Contax 645 80mm f2 lens. Both are great portrait lenses and let me work in less light. For most other medium format film camera systems the fastest lens is usually f2.8 and many lenses being f4. The Hasselblad 501C is an good example of this. An f4 lens on a cloudy winter days is not going to work for window portraits unless you push the film to perhaps ISO 1600. For that reason I use flash to mimic daylight. Some old film cameras can work with flash triggers, some with PC sync cables, and with some there is no option to use flash at all.

Below are unedited images from the Leica CL camera SD card preview. Which of the following sets of portrait images are made with flash? A,B,C,D,E,F as marked below.

In this YouTube video I also include diagrams of the different lighting setups I use. You can then hopefully replicate the setup to get a similar look.