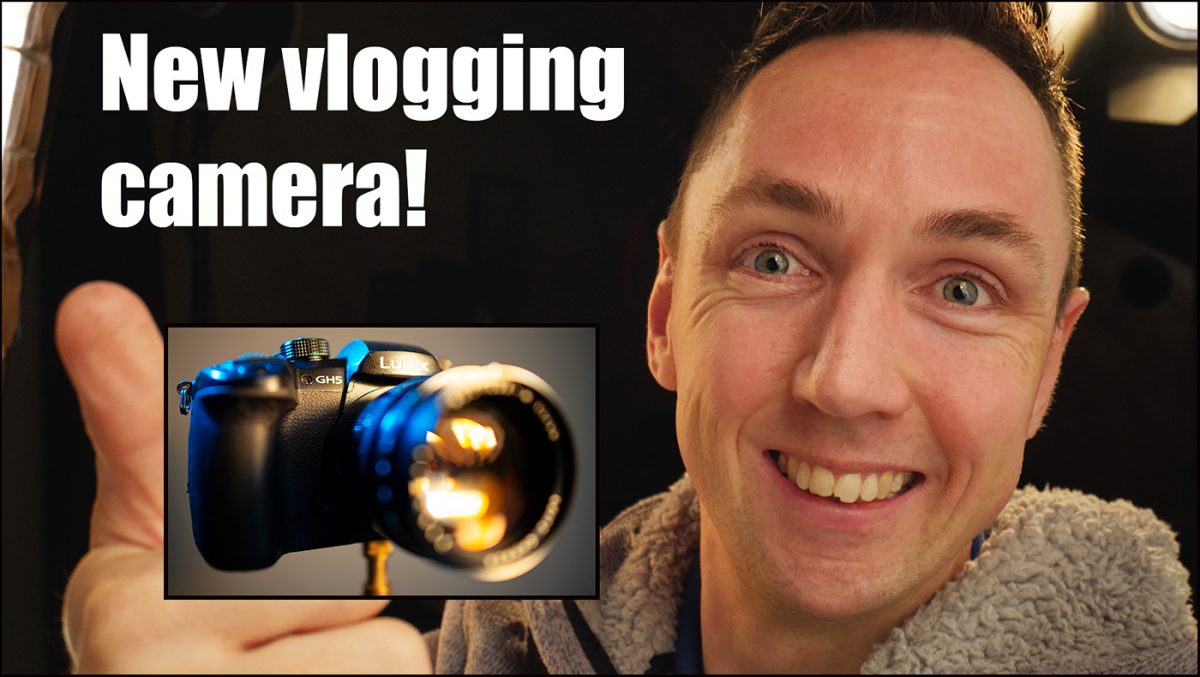 Quick overview of why I purchased my new Panasonic Lumix GH5 vlogging camera!  (This is not a camera review but that will follow at a later date).

Whenever I think I’m safe from the dangerous GAS, aka. Gear Acquisition Syndrome something comes out of nowhere and catches me by surprise.  I certainly didn’t see this one coming! The Lumix GH5 idea came within two days and it was ordered.

After throwing myself head first into the scary world that is YouTube I’m now wishing I’d started it years ago.  I just keep thinking of all the cool things I’ve done and wished I’d caught on film to share!  I still need to drastically improve my monotone lifeless talking head style videos but I’m very excited to get cracking.

My overwhelming passion for photography and to share content overcomes any doubts I have to face the camera. My head is full of topics I want to share on YouTube, I just wish I had longer days to do it all sooner!

If I do something I like to do it properly.  If take a photo, regardless of the model I try to exceed my previous best photo.  If I enter an Ironman triathlon I aim for a good time rather than just taking part.  With YouTube videos initially I was thinking to keep it very simple and no frills.  I tried this but with my mind set that wasn’t really going to work for long.

One of my very early YouTube frustrations is that the Nikon D800 camera I film myself with has no flip out screen. The Yi4K+ action camera I have also doesn’t have a flip screen. I felt I could do a better job of it if I had the right tool for the job. It was an excuse to look an new cameras if nothing else!

The first time I shot video footage was with a crop sensor Nikon D90. From there I upgraded to a Nikon D800 and more recently a Yi4K plus action cameras. Feel free to skip the next few sections if you only want to read about the Lumix GH5 but I thought I would give it some context.

In 2012 I bought my Nikon D800 DSLR camera on pre-order specifically for recording video. At the time I was shooting as part of an Asian wedding videography team. The Nikon D800 camera allowed me to capture cinematic style footage by using fast lenses on the full frame sensor.

It was all great except video took me too long to edit (if shooting for myself) and I had no reason to shoot video other that for these wedding team gigs. Once I bought the Leica M9 that was the end of video for me and I sold my slider and most of the video specific kit. Soon after I got into film photography at that has kept me busy ever since!

Yi4K Plus (To record Ironman training)

When training for the second Ironman last year I was watching back to back YouTube videos. YouTube helps inspire me on whatever my current ‘phase’ is whether triathlon, ultra marathons, photography, vlogging or otherwise. From watching many ultra marathon videos I noticed everyone had GoPro style cameras and they recorded their experiences.

Slightly brainwashed by what I saw I bought the Yi4K plus action camera as a cheaper alternative to a GoPro. I setup an additional Instagram account to share such footage and that was the plan (@MrLeicaRunsBikesExplores). The action camera was great for running and cycling but I realised I didn’t like seeing myself on camera so that idea slowly faded too.

When starting YouTube I used the Nikon D800 to vlog with. The Nikon D800 in it’s day was a great camera but it fell slightly short of the Canon 5D Mk3 at the time for video use. Most wedding videographers were using Canon DSLRs but as I photographer I opted to stay with Nikon.

The main limitation today of the Nikon D800 is the lack of flip out screen. This makes it pretty difficult to know where you are in the frame for vlogging purposes. With manual focus fast lenses it is also near impossible to keep yourself in focus (as I proved in one of my videos, apologies!).

As the Yi4K plus has a wider view fixed lens I tried using this for YouTube too. Yes it is easy to be in the frame but is can distort the face easily when in close to the camera. Action cameras are great for running videos or vlogging outside while multitasking but it is not really suited to talking head videos. (That was my excuse to get a new camera anyway!).

Why the Panasonic Lumix GH5?

When toying with the idea of a new camera for a better video solution I first looked at the smaller beginner level Nikon DSLR cameras. Some Nikon cameras have flip out screens which was the main feature I wanted for vlogging. After days of intense YouTube review videos (watching) I discovered the Panasonic Lumix GH5. I knew of the camera but nothing about what it can do. Having owned and used a Lumix G1 and Lumix G3 in the past I was happy to go with the Panasonic Lumix brand.

As a Leica photographer one huge advantage of the Micro 4/3 systems is I can use all my existing Leica glass on the Lumix camera. Most lenses can be mounted on the 2x crop sensor M4/3 system cameras whether Nikon, Canon, Leica, M42… In contrast you cannot mount a Leica lens on a Nikon DSLR for example. Another big advantage of the Lumix M4/3 camera is the small form factor similar to Leica. I love small cameras and small lenses!

Perhaps I was lucky but after discovering micro four third cameras on YouTube I found a used Lumix GH5 camera listed online at a seemingly bargain price. It was a UK photography store but the price was cheaper than used GH5 cameras on eBay so I ordered it. Camera body only, perfect for me. As an experienced photographer I much rather buy a lens that suits my specific needs than be limited to and unhappy with a supplied kit lens. (I will do a separate review on the camera when I have used it and can share some example images).

Micro four third cameras like the Lumix GH5 have a 2x crop factor smaller sensor. This means a standard 50mm lens on the full frame Leica M240 is equal to 100mm on the GH5. When buying a lens for vlogging this crop factor must be considered. If I plan to hold the camera at arms length to talk to it I need a lens wide enough to show more than just a tight crop of my head.

One of the popular low cost Lumix kit lenses is the Lumix 14-45mm which gives 28mm-90mm in full frame terms. 28mm is a bit too tight for me so I looked for wider. There is the well regarded Lumix 12-35mm fixed f2.8 lens (giving the popular 24-70mm focal length often used at weddings). A great lens as I understand but I wanted something smaller and cheaper ideally.

I then found the really tiny, extra lightweight, very affordable older Lumix 12-35mm retractable pancake lens. I didn’t need the f2.8 shallow depth of field for talking into the camera so I bought that as my first lens. (I will review this lens properly once I have used it).

As with any new camera or lens I am very excited to see what the GH5 can do, both for my photography and video use. I have no expectations for photography specifically but I said the same when I bought the Leica CL! I plan to use the Lumix GH5 mostly for video and I’m hoping it will add some excitement to my potentially quite dull YouTube videos!

It’s going to be quite difficult to add new features to my videos without following the masses. When binge watching YouTube it is very easily to get influenced by others. One phrase I have certainly already picked up from YouTube is adding the word “Super” to every sentence! Sorry!

The Lumix GH5 price when it was released was over £2k but you can now find huge savings on Amazon. Here are some of the best deals I saw when researching for mine –

Here are a few Lumix GH5 photoshoot sample photos from yesterday with Harriett. I will do a separate blog for this when I’ve taken more images. The GH5 does look very promising though! Lumix Lightroom preset(s) to follow too as I’m developing them for myself.

Lumix cameras may be better than you think. See here for example images of me using the Lumix G1 and Lumix G3 Micro Four Thirds cameras.