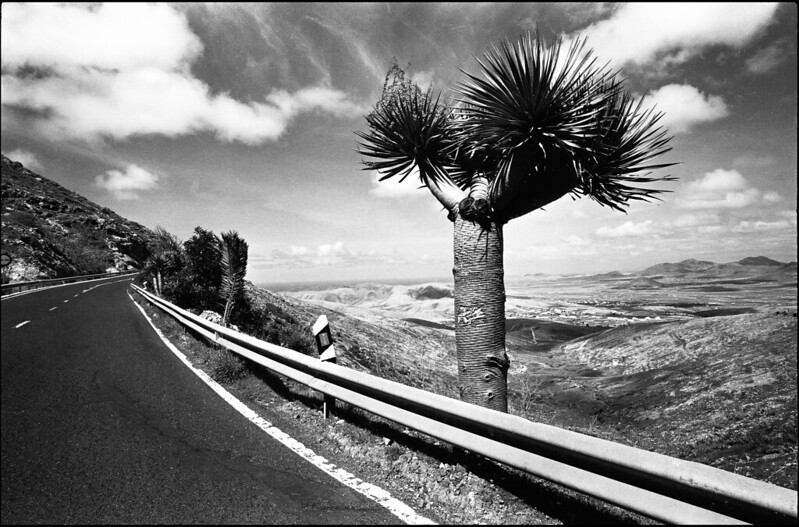 After enjoying my cycling and photography on my last solo visit to Fuerteventura in December 2017 I decided to go back again for more of the same! (Written back in March on my flight home).

A strange camera choice you might think!? Especially if you knew that my Bessa R3A needed recalibrating! There is some method to my madness.

On my last cycling-photography trip I enjoyed traveling light with a 35mm Leica film camera and four 39mm filter thread Leica lenses. I thought how can I go one better than that? The Voigtlander Bessa is quite a bit lighter than a Leica M film camera (by me holding it anyway) and is more plastic feeling. I thought if I wanted to go even lighter than a Leica this my best option for an interchangeable lens film camera. (I think my Olympus 35RC is my smallest lightest fixed lens 35mm film camera but has a fixed lens). My Bessa R3A has needed recalibration for a while hence I don’t normally use it. For landscape photos however when I am stopping down the lens to F11-F16 hopefully it won’t matter too much if the rangefinder is not that accurate.

Next was lens choice. Although I enjoyed the choice of lenses last time, having a 28mm, 50mm, 90mm and 135mm meant more to carry and more faffing changing lenses at the side of the road. I wanted to ideally use one camera one lens so I packed my recently purchased Voigtlander Color Skopar 21mm f4 lens which is my smallest lens of any camera system. To be able to compose I would need to use an external viewfinder as the widest framelines on the Bessa R3A is 40mm. I already owned the Voigtlander 21-25mm hotshoe viewfinder so that was perfect for the job. I know I wanted to try using one lens but I was also aware that the Fuerteventura landscape is quite open and ‘empty’ looking so 21mm might be a little too wide. I therefore decided to pack my second smallest lens, the  Voigtlander Color Skopar 35mm f2.5 lens.

The Voigtlander Bessa R3A camera I was using for the trip (very similar in size to a Leica M film camera) (Archive photo – Bessa R3A with the Voigtlander Nokton 40mm f1.4 lens) 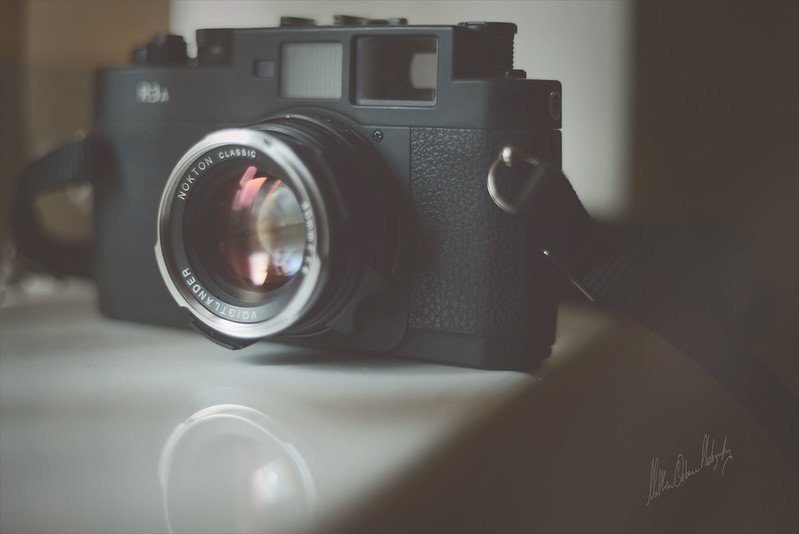 I noticed after my last visit that some of the photos had darkened corners from using two lens filters stacked together. I was using a yellow filter and a circular polarizing filter (“CPL”).  The CPL lens did make the clouds pop in the sky but it was also a faff taking it on and off to check orientation before taking a photo. With a 21mm lens using two 39mm filters stacked together would certainly darken the corners of each image so I packed the yellow filter and left the CPL behind.

When I developed the 35mm black and white film from the last trip I thought it might be nice to shoot the same scenes on a larger negative to capture more detail.  I just had two very nice cameras back from recalibration that would both do the job perfectly, the Fuji GF670 folding 6×7 film camera and the Hasselblad XPan panoramic 35mm film camera.  The reason I didn’t take them is after being recalibrated the focus is spot on with both cameras with the lenses shot wide open and up close. I didn’t want to risk knocking them out of alignment again by carrying them in a small rucksack and cycling and running over bumpy ground for four days. I therefore packed my smaller lighter more plastic feeling Fuji GA645 Pro medium format camera. It may look like a toy camera but it has a fantastic lens.  It is also not a true rangefinder and has autofocus so is less prone to the usual rangefinder miscalibration problems I face with the Leica M cameras and other RF cameras.

With regards to film choice I packed only black and white film. I chose finer grain film and decided on 35mm Kodak T-Max 100 for the Bessa R3A to get both fine grain and Kodak black blacks. For 120 film I went for Ilford FP4 Plus film as grain is less noticeable with a larger negative. 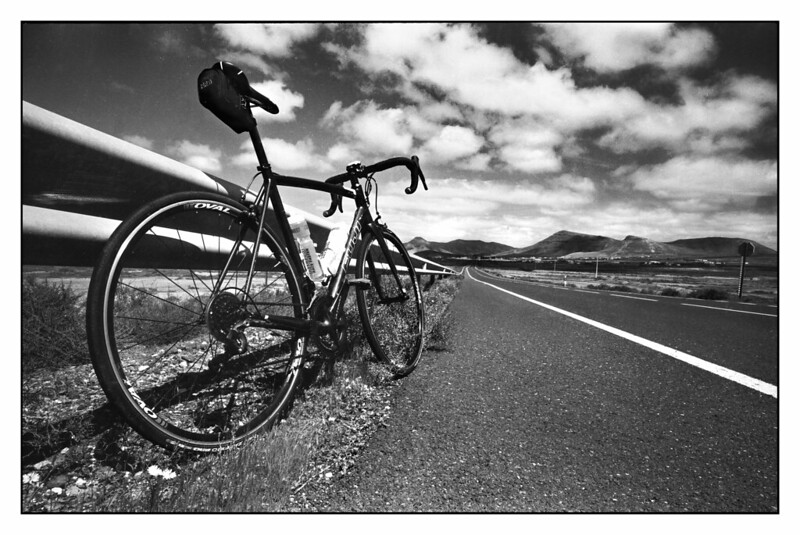 I won’t bore you with day one, cycling, day 2, cycling, day 3, more cycling but I will summarize the photography aspect.  I packed the Bessa R3A and the 21mm Color Skopar lens for the first full day. Due to me leaving the apartment later and sunrise being earlier at this time of year I sadly/ stupidly missed the golden hour most days. The landscape didn’t look quite as wow as last time when the days were shorter plus Fuerteventura wasn’t new to me anymore so I probably lacked the excitement aspect of a new place to explore.  I took perhaps 10 photos on the first day ride and that was all. It was windy riding so I think I was more focused on making progress along each road/ up each hill and/ or trying to stay on the road (I got a two corners on the decent badly wrong). I think less attractive light was the main reason for less pictures though. The next full day I took another 10 photos and again kept with the Bessa R3A/ 21mm Skopar combo.  My choice of subjects for the majority of the images was completely different to my last visit but I just photographed whatever caught my eye. The wind was increasing each day so for the last day I didn’t take a bag or camera with me and just did a shorter ride before I had to check out. That meant I didn’t even try using the Fuji GA645 camera nor the 35mm Skopar lens. I think the wind and less pretty light meant my focus was more on cycling than photography this time. Maybe I should have watched landscape photography videos on YouTube ahead of the trip like I did last time to get the juices flowing but I wasn’t disappointed either way. Cycling is my second favourite past time and doing anything in the warm sunshine is enjoyable so I have no regrets. 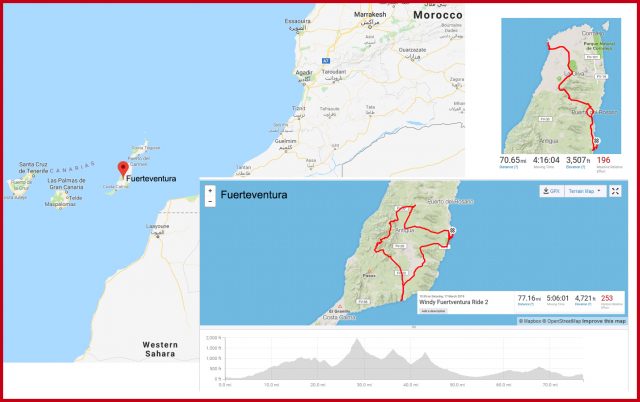 I enjoyed the one camera one lens setup and would happy leave the 35mm lens and Fuji GA645 behind next time.  I was happier with my use of time for this trip as I cycled every day and ran three of the four days (walked 20k steps on the first day instead, exploring and a big grocery shop).

I hired a road bike from Jeff at Caletta Cycles again and it didn’t miss a beat. Thanks Jeff! My apartment was closer to the bike shop so I could run/ walk to it yet far enough away from the mass tourists in the LEGO land style tourist resort.  I was living amongst locals out the way a bit so was happy.

I shot some colour film on the last trip but still haven’t had chance to catch up with all my backlog of colour film developing/ processing.  Here are a few shots i’ve scanned that I shot on Kodak Ektar 100 film. 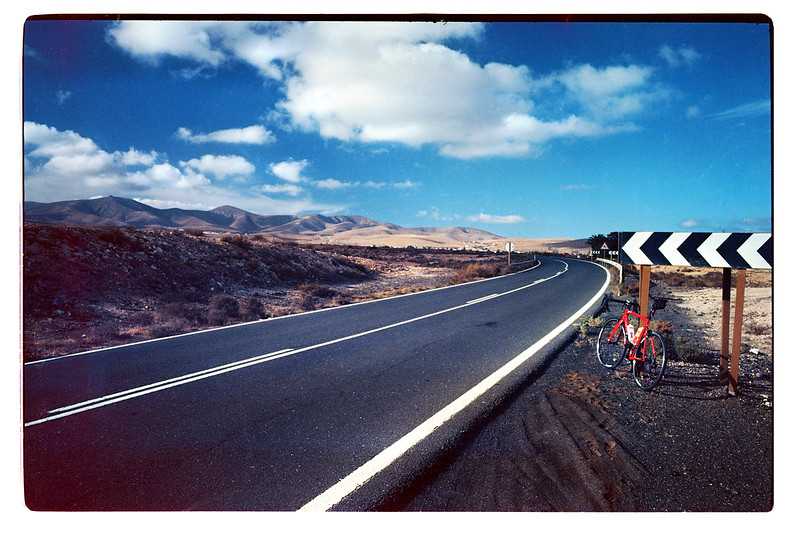 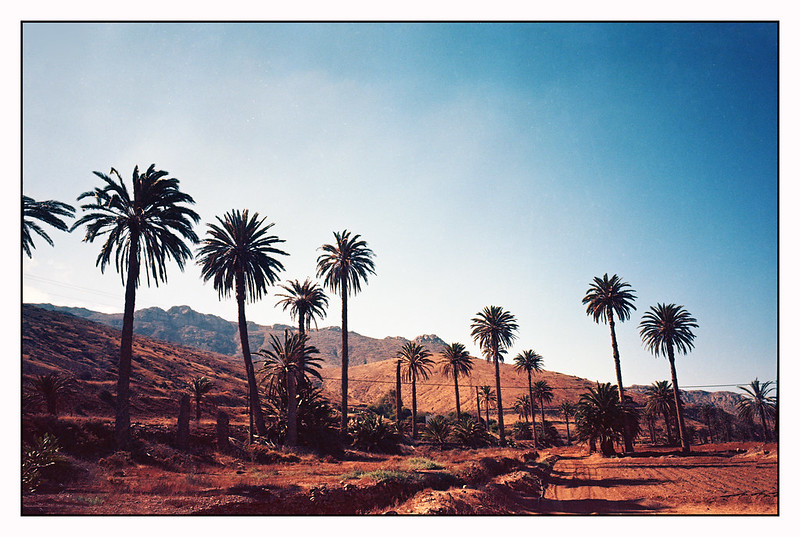 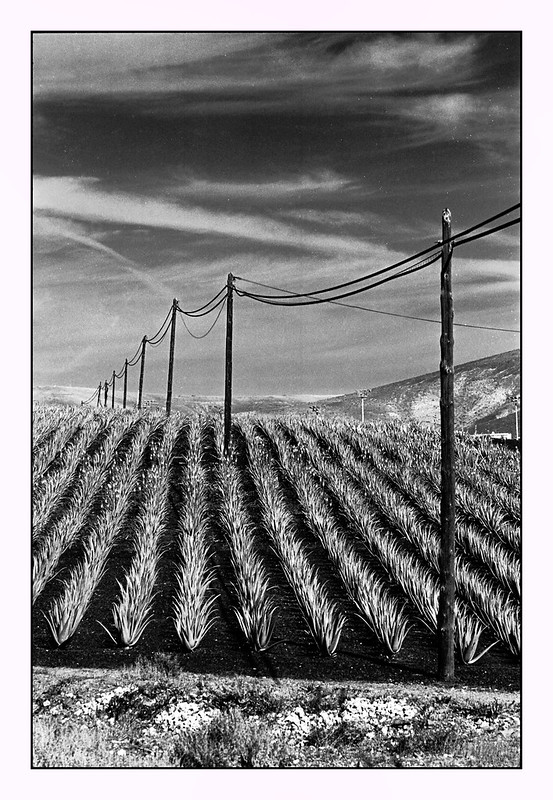 I generally prefer black and white photography but my eyes did keep spotting the opportunity for some super saturated popping colour photography.  I might have to consider colour film again for the next visit. The main contrast to my visit in December is in December the Fuerteventura landscape looked very dry and baron with the mostly red dry rocky landscape.  Visiting in March I was greeted by fresh green grasses blowing in the wind along the side of the road, lots of different daisy type flowers and tiny red succulents growing out the gravel at the side of the road. It took me back to my macro photography early days when most of the images I was seeing were the tiny details rather than the wider landscape.

Until the next one! On my flight home back to the snow and cold in the UK. Yey! (Not). 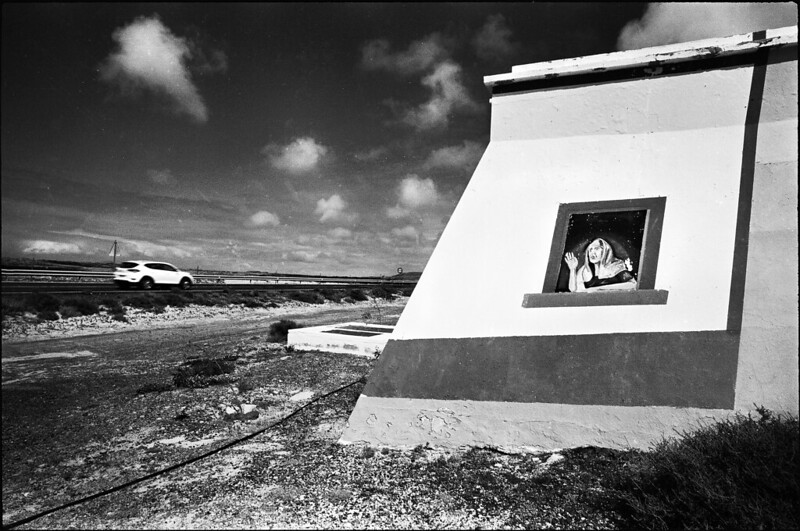 ..I often ask myself why I have not moved to a warmer climate with proper sunshine when most of the my hobbies rely on dry weather and being outside. I would be as fit as a fiddle as they say as I would be outside enjoying it so much more.  (The first thing I noticed when landing in Fuertevenura is how everything looks so much more photogenic in direct sunlight. Even the most ugly looking concrete walls). I think any photographer blessed to be able to work and live in a country with days of endless sunshine would really struggle shooting in a country like the UK where often the light has no or little direction. I’m 99% sure.