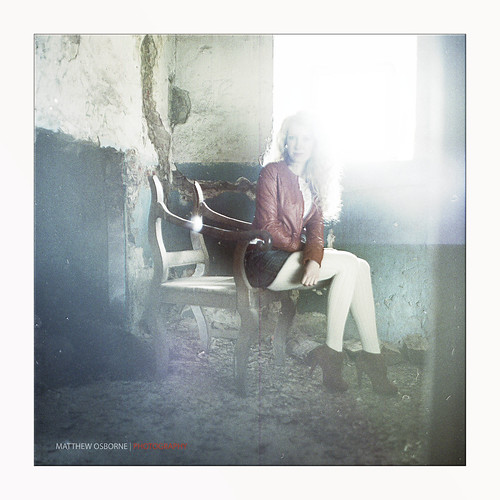 Vintage Look Film Photography, a photo by MatthewOsbornePhotography_ on Flickr.

Taken with my Russian medium format film camera, the ARAX-CM 6×6 that is a rebadged Kiev 88 and also known as a Hasselbladski. The Kiev 88 was a Soviet clone of the Hasselblad 1600 F hence the name. If you want to buy an ARAX camera you should get in touch with Mr Gevorg Vartanian at http://araxfoto.com/ where he will be happy to help. I found the customer service to be excellent and have made several purchases from him.

This photo was shot in an old castle in Ukraine with model Olga on a day trip back in spring 2013. Shot on Fuji Pro400H colour film.

Details and defects as shot. I didn’t clean up the photo as it is slightly mis-focused on the face plus I liked the vintage look despite the light leak.

I have only recently had this batch of colour film lab developed and it was then I noticed the ARAX film back had incurred a light leak problem. Frustrating but it is now fixed with a bit of card and sticky tape!

I love the simplicity of my ARAX. No battery or electronics to go wrong, just a box, a viewfinder, a lens and a film back. It reminds me of my first car, a Russian Lada Niva Cossack 4×4 that also had minimal mod cons! Both can be mended with basic tools and their simplicity make them a joy to use.

I used to use the ARAX-CM as my travel medium format film camera as it would fit in my bag easily unlike my Mamiya RZ67 Pro II which is too big. The huge viewfinder on the Mamiya does makes focusing a doddle but I prefer the 6×6 format vs the 6×7 I think.

I guess they both have their pros and cons! 🙂