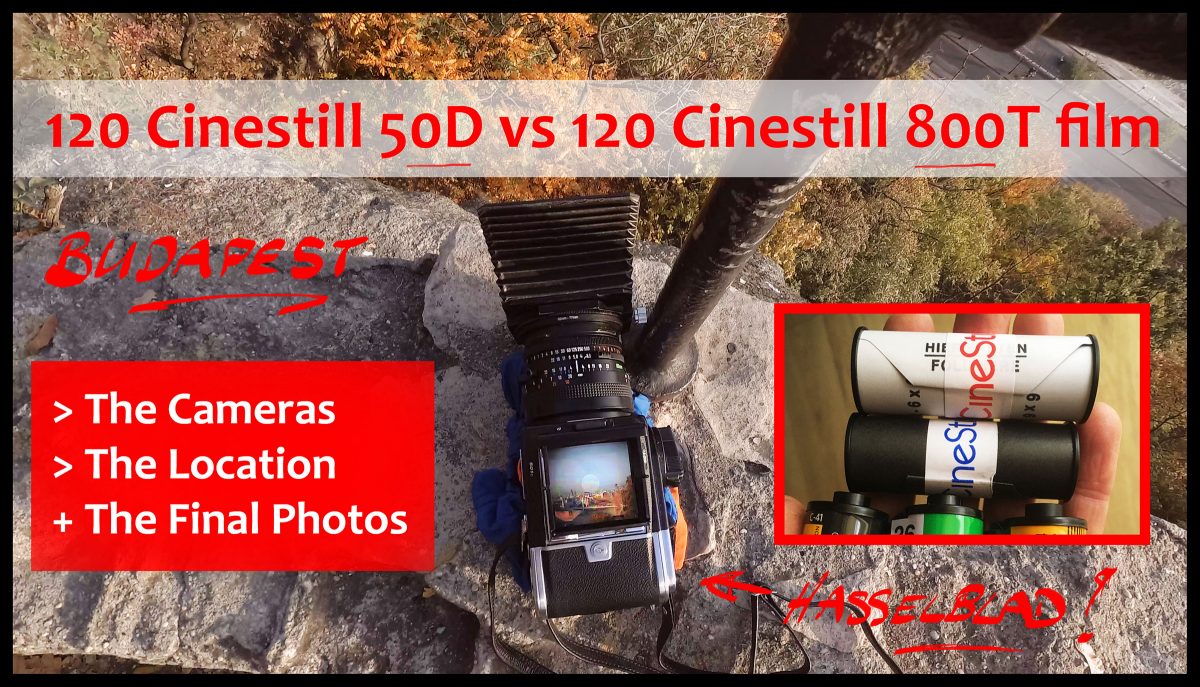 When Cinestill 800T first came to the market is was available in 35mm film format only. I was an early adopter and you can see my results using 35mm Cinestill 800T shot with a Leica, Xpan and other 35mm film cameras. Without repeating myself to much, (see the 35mm link for more) Cinestill 800 film is a tungsten balanced film.

The T in Cinestill 800T refers to tungsten or tungsten balanced. Most films are daylight balanced meaning the colours we capture are similar to what we see with our eyes. Tungsten light (3200K) is warm (yellow-orange colour) light rather than daylight (5500K) which should appear white. (The middle point between warm light and blue light).  At the start and end of each day daylight is more of a blue light hence it is called blue hour. Cinestill 800T is repackaged Kodak Vision3 500T motion picture film (movie film). As with Cinestill the T in 500T relates to the fact that it is tungsten balanced.

The Brothers Wright launched the Cinestill brand after developing a process to remove the RemJet layer from Kodak movie film. The black anti-static RemJet layer is needed when Vision3 film is used in movie cameras but not for still photography. By removing the Remjet this film can then be developed in standard C41 chemistry. (Kodak Vision3 is actually ECN-2 film so if the Rejmet layer is still on it should be processed in ECN-2 chemistry. (*To obtain the true film colours. Processing Vision3 film in C41 chemistry is cross processing the film).

Pre-removal of the Vision3 film Remjet layer was a brilliant idea as the film can now be developed in your local film lab. Film labs usually offer the service to develop two types of colour film. C-41 chemistry for colour negative film (including Cinestill) and E6 chemistry for colour positive film (slide film).

If you buy standard Kodak Vision3 motion picture film with the Remjet layer on you can’t take this to your film lab. The Remjet layer on the film will contaminate the labs C41 chemistry. I shoot Cinestill and Vision3 films and you can see how to develop movie film at home (including removing the Remjet). Shooting with Vision3 film stocks and then developing it at home is much cheaper but it takes more time and effort. When I only want to shoot 1-2 rolls of movie film it is easier to just buy Cinestill and get it lab developed.

Cinestill 800T has a unique and signature look which can be the reason to buy the film instead of Kodak Vision3 500T. A side effect of removing the anti-static Remjet layer is it also removes the anti-halation properties of the film. Halation means if you photograph a point of light (say a street light) you will see a glow around the light bulb. With most films you would just see a bright bulb then quick fall off of light to dark. This effect is also lens specific to an extent. A modern lens with modern lens coatings will show little halation with standard film. Example – Leica Summilux ASPH 50mm f1.4 lens . A vintage lens with no lens coating flares more easily when pointed at a light source so you see a greater halation effect. Example – Leica Summarit 50mm f1.5 lens.

One amazing benefit of shooting with movie film is the emulsion is designed to have greater latitude. This means retaining more highlight and shadow detail. Cinestill 800T latitude is excellent and I rate the film from ISo 100 to ISo 1600. I then develop the film as normal at box speed. No push or pull. For me Cinestill 800T film is better over exposed as there is less apparent grain but that is personal preference.

I backed the Cinestill 120 kickstarter projects and I still have some Cinestill 800T Beta rolls in the fridge to use. The Beta film was delivered to my sisters house in the US (at the time) so there was a big delay receiving it. Once received, it was bad timing as my interest had switched more to 35mm film photography – Nikon FE2 (at the time).

So yes I’m very late to the Cinestill 120 film party but I finally shot my first rolls! Here I share photos from my 120 Cinestill 800T test roll shot in Budapest, mostly in daylight. Ideally I would have shot more night photography with the film but it was just the film loaded at the time.

I didn’t use the often recommended 85B warming filter when shooting the Tungsten balanced Cinestill 800T film in daylight. This gives the film negatives more of a blue cast that I can correct in post later as needed. I tried to photograph a variety of colours for a fair test including a few portraits.

After the success of Cinestill 800T film launch The Brothers Wright also released their Cinestill 50D film. Again this film is repackaged Kodak Vision3 motion picture film. It is Vision3 50D film stock with the Remjet layer removed to allow it to be developed in standard C41 chemistry. Unlike Cinestill 800T, as the name suggests, Cinestill 50D is daylight balanced film. D for daylight. This makes 50D daylight balanced like most colour negative films whether Kodak Portra, Ektar, Gold, Fuji Pro 400H and so on.

Cinestill 50D is an ISo 50 film stock like say Ilford Pan F 50 so offers super fine grain. 120 film photos have less grain due to the film negative size compared to 35mm film. This makes 120 50D film look almost digital in that there is little or no apparent grain. As with Cinestill 800T, Cinestill 50D has great latitude and does particularly well retaining highlight details.

Both rolls of Cinestill film were lab developed in C41 colour film chemistry. The film negatives were scanned at home with an Epson v800 flatbed scanner and processed via Silverfast software. The film scans were then imported to Adobe Lightroom to crop and resize. Small size photos shared have basic edits only and straight from Adobe LR small size. Some of the larger photos shared were also put through Adobe Photoshop to clean up before being posted full size to Flickr. You can click on the large size edited images shared to zoom in via the Flickr website. A two tap zoom lets you see the film detail up close for any pixel peepers out there.

Both Cinestill 50D 120 and Cinestill 800T 120 are excellent films. I would happily use either film again. If I could only use one of these film stocks it would definitely be Cinestill 800T. I love the halation effect offered by the 800T film and the ISO 800 film box speed makes it a very versatile emulsion. There are not many films that can be shot at ISO 100 to ISO 1600 on the same roll. If you are looking for a super fine grain colour film Cinestill 50D offers that. The ISo 50 is limiting though so you may need to use your camera on a tripod, use fast lenses or only photograph in good light.

Here is the same scene shot with the same camera. One photo is 120 Cinestill 800T and one photo 120 Cinestill 50D. You can see the blue tones from the Tungsten balanced film shot in daylight without a warming filter.

There are other fine grain colour films available. You could shoot with fine grain slide films such as Fuji Velvia, Fuji Provia or Kodak Ektachrome E100. If you want saturated colours from a colour negative film you could try Kodak Ektar 100 which can also look near digital.

When it comes to ISO 800 colour films the options become much more limited. The most popular choice is probably Kodak Portra 800 film but there is also Lomography 800 film. I have been playing with some Lomo 800 film so I will share the results soon.

When in Budapest last year I was just starting my new MrLeica.Com YouTube channel. I had my GoPro with me (Yi4K Plus Action Camera) so I shot some B roll from the time I was taking the above photos. The video shows the location some of the photos were taken, the cameras and the camera bag I used for the trip.