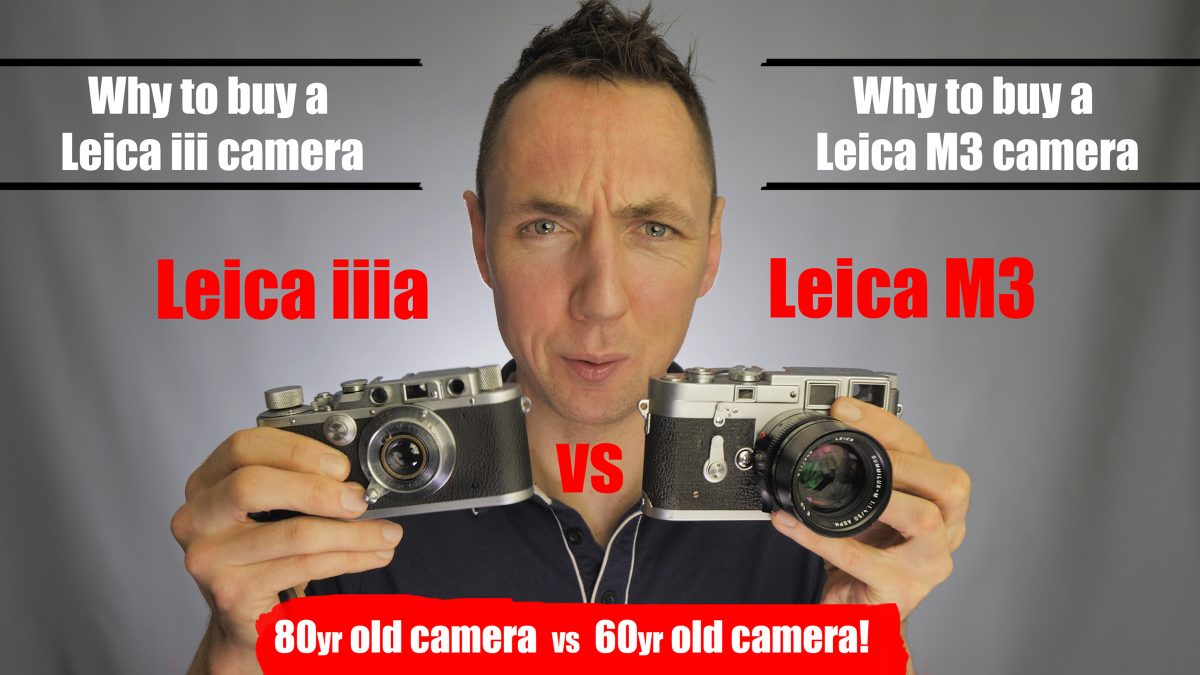 Do you know what a Leica iii camera is? Me neither until one week ago! This Leica iiia review will explain some of the basics and I will share what I now know. It also accompanies my new Leica M3 vs Leica iiia review video on YouTube (linked below)

Why did I buy another Leica camera!?

If you have seen my YouTube channel or follow this blog you will know I don’t need any more cameras. I was happy with what I had. I didn’t even really know what a Leica iii was other than an ‘old Leica’.

So what happened? Well I blame the Leica Thambar 90mm lens! (Review still to follow!) Why? After using the Thambar lens and appreciating the vintage look rendered by this glass I decided to get on eBay. I didn’t go online to buy a £5000+ Thambar lens though. Instead I thought it would be smarter and much cheaper to just pick up a very early Leica lens. Early Leica lenses often have no lens coating so can create that vintage look straight out the box. A vintage look may commonly be thought of as low contrast, soft corners to the image, risk of lens flare and often more interesting bokeh and with less clinical rendering.

I already own some of the early Leica M mount glass such as the Leica Summarit 50mm f1.5 lens and Leica Summaron 35mm f3.5 lens. My plan was to therefore look for even older lenses with the early 1930s lens design. Lenses of this period are the Leica screw mount or Leica thread mount (LTM) design. These early Leica lenses screw into the camera body rather than the standard Leica M mount bayonet fit. You can then use a cheap eBay adapter to mount Leica LTM lenses to Leica M cameras (Leica M – Leica LTM adapter).

After scrolling through pages of vintage Leica lenses listed on eBay I noticed that in some cases the lens was being sold with the same period 1930s-1950s Leica camera. What surprised me more so was the additional cost to buy the same lens with a camera included was minimal. Why buy just a lens when I could have a lens and a new camera to play with!? “MrLeica should own at least one vintage Leica camera” I told myself! With that I put a bid on and it was happily accepted. Woohoo!

If like me you become inspired to check out the old Leica gear on eBay in search of a bargain you need to be a little bit careful. If a camera is 80 years old there is a chance it may be in need of a full service or CLA before it will work as originally intended. The shutter speeds may be slow and not accurate for example. Some eBay sellers state that the camera will work/ “may not work”/ “just for parts”. My seller shared a YouTube video showing the camera working so I felt safe to make my purchase.

If you look at multiple listings for the same camera this will give you an idea of the price range from cheapest to most expensive. My observation was that often for the best deal you should look to purchase a camera with a lens attached rather than buy a camera and lens individually.

For vintage Leica lenses the uncoated front elements were very prone to scratches. With an 80 year old lens from this era it is also common to find haze, fungus or dust inside. A 1930s – 1950s Leica lens can be a gamble but you may get lucky. Often the cheaper lenses listed will be in the least mint condition but you may find a gem amongst them. Equally the more you pay the better condition the lens should be in but this isn’t always guaranteed. You may just pay over the going rate for a bad copy of the lens. It is worth checking the eBay seller’s photo and description carefully to try to determine if the lens has clear optics before buying.

Before the days of the very popular Leica M cameras there was the original Leica cameras. Oscar Barnack designed the first Leica screw mount camera and these were produced from the 1930s to the 1950s. In the mid-1950s the Leica M3 was released (the first Leica M film camera) and that soon replaced the earlier Barnack-design Leicas. There was some overlap with the Leica iiiG being released after the Leica M3.

With my background being Leica M cameras I’ve always said the Leica M3 is the best M camera. One reason is it is beautifully made with seemingly no expense spared. If anyone asked me I wouldn’t hesitate to say that the best made Leica is the Leica M3. Then I bought my 1939 Leica iiia. That changed my opinion instantly! I don’t buy cameras to polish and put in a cabinet and for me a Leica is a tool. Saying that I was still blown away by the beauty and elegance of the Leica iiia camera. It is the closest camera I have seen to an over engineered finely crafted swiss time piece. I think I would be happy just to photograph it as a subject and use it as a prop!

Leica M3 vs Leica iiia – Ease of use

Yes the Leica iiia camera is beautiful but it is slower to use so will not suit everyone. Unlike the Leica M3 with it’s big bright combined viewfinder/ rangefinder window the Leica iiia has two separate tiny windows. Looking at the back of the camera the left window is the rangefinder, so you can focus you image. The right window is the viewfinder to compose you image. You need to move you eye from the left window to the right window before taking the photo. The Leica iiia reminds me of my vintage 6×9 Soviet Moskva-5 camera in that regard (See here for sample images – Moskva-5).

The Leica iiia viewfinder/ rangefinder design together with the film advance nob rather than a lever makes the camera slower to take photos. The Leica iiia is also slower to load film into as the back plate of the camera does not open. This makes it a little bit more fiddly to ensure that the film is engaged into the sprockets correctly.

How to load film into a Leica iiia (YouTube)

I have recorded a YouTube video to demonstrate how to load film into a Leica iiia camera (or any Leica iii camera). I will link it here once posted.

Summary of the Leica iiia vs Leica M3 Specs

Cheap Leica film camera – is there such a thing!?

Actually yes! Yes there is such a thing as a cheap Leica camera. For the price of a second hand Nikon SLR film camera you can actually get yourself a beautiful vintage Leica camera! I know this fact as I have bought both these cameras in the last 12 months. Yes the Nikon F cameras are far more practical but if you really have you heart set on a Leica it is possible on a budget. The Leica iiia is approximately 1/3 of the cost of a Leica M3 camera. Prices vary widely but i’m basing this on paying £200 for a Leica iiia camera body and £600 for a Leica M3 camera body. You can pay more or less for both these cameras on the used market depending on the camera condition etc.

So what are my thoughts so far of the Leica iiia?

As summarised above, I love the lightweight compact yet elegant build of the Leica iiia camera. Perfect for fitting into a jacket pocket when going out for the day or in my case to fit into a jersey pocket if cycling/ hydration vest pocket if running! The Leica iiia is better suited for when you have time to take your photos. It would not suit a fast paced environment such as a Leica wedding shoot. (Too slow to operate and too slow film loading). I’m very glad to have discovered these older Leica cameras and I look forward to taking it on trips in 2020. (You will be able to see when I do as I will show my’ adventures’ on YouTube!)(I’ve booked a few cheap flights already to try to help keep things interesting!).