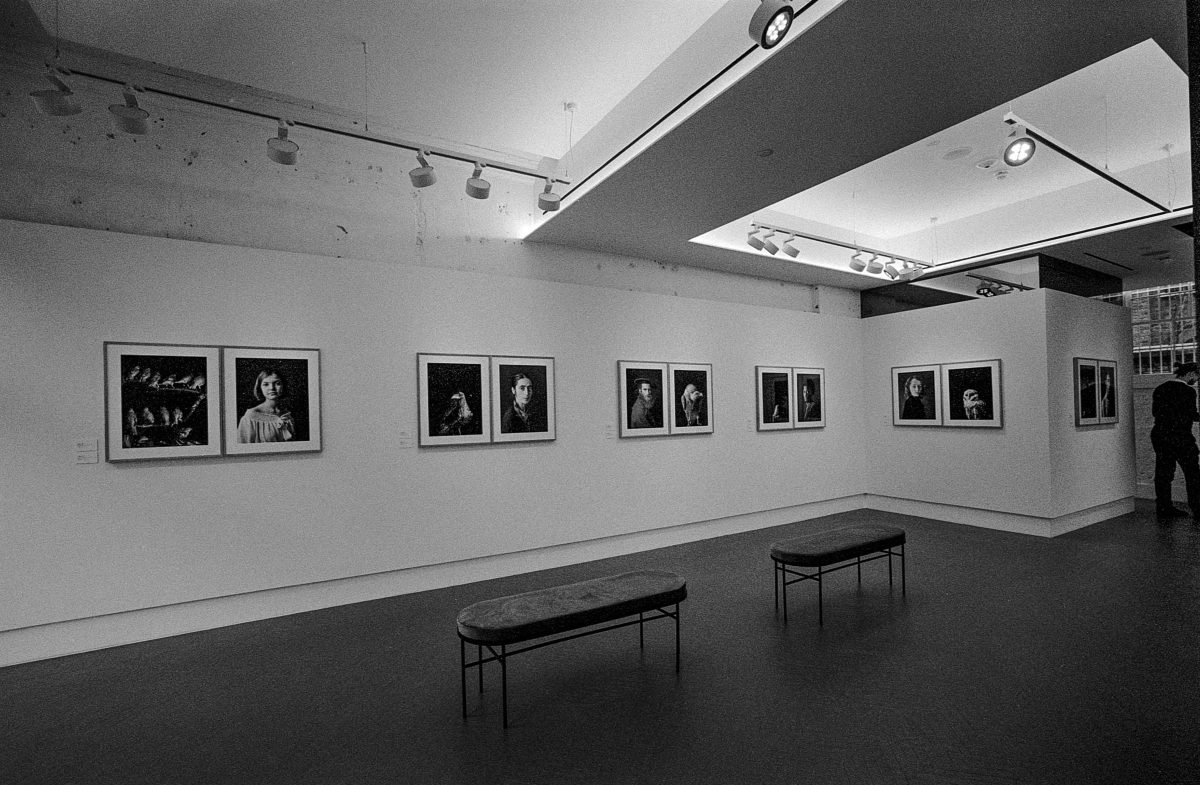 After exposing my first test roll here is a Kentmere 400 review with example images. It compares the budget 35mm B&W film Kentmere to other popular black and white film stocks. Article also includes a YouTube video of my Kentmere 400 vs Ilford Pan 400 shoot out test.

I’m not new to the Kentmere film brand. I first discovered the Kentmere emulsion when I was running a photography workshop in New York maybe 4-5 years ago. I picked up a 10 pack of 35mm Kentmere 100 B&W film in the B&H Manhattan store and I was happy with the results. (Shooting the film in both Leica film cameras and a Hasselblad XPan). It wasn’t until a few years later that the Kentmere brand started to appear for sale in Europe.

Despite the branding, Kentmere 400 film is actually manufactured by Ilford. Ilford sell Kentmere film as a more affordable alternative to their own Ilford HP5 Plus 400 film and Ilford Delta 400 film stocks.

Ilford state that 35mm Kentmere 400 has good latitude and is easy to develop. Being a cheap film Kentmere is also an excellent choice for students or any photographer on a budget (like me!). Kentmere film is one of the cheapest black and white films available but it still can’t compete with Fomapan 100 film. Foma 100 is the cheapest B&W film to my knowledge in Europe and it is still very usable.

(I shoot Fomapan more than any other film).

In the past I used to shoot with Kodak TMax 400 as my main 35mm ISO 400 film. After the price rise I’ve switched to trying some new cheaper B&W film alternatives. (I can always go back to Kodak but it is nice to experiment with different film stocks).

Are Kentmere 400 and HP5 the same thing? I mentioned the speculation in one of my previous YouTube videos that Kentmere 400 film is the lower quality off cuts from the sides of Ilford HP5 manufacturing film rolls. I’ve now read that is isn’t true and Ilford claim that they don’t re-badge their film. Who knows! I’m not too fused either way but I thought I would mention it. I just buy film if I like the look of the results regardless of who makes it.

I’ve not yet had chance to shoot many portraits using Kentmere 400 film but when I do I will post them here. Here is a sample photo taken with a 15mm lens from my first K400 test roll.

(Update* I shot a roll of 35mm Kentmere film on a recent model shoot in Poland so I will embed more Kentmere 400 portrait images here soon!).

First Kentmere 400 portraits from Poland! I’m really impressed with the detail captured but the film scan showed blemishes from the developing (I think that is the marks though it is not visible on the film itself).

The original Kentmere 400 film box branding said “Kentmere 400” on the side (white box and cassette label). The new branding reads “Pan 400” on one side and it has a pink-purple box design. (“Kentmere” is written on the other side). If Kentmere 400 becomes known as Pan 400 it is very easy to confuse this film with the Ilford Pan 400. They are different film from my own testing but no wonder people get confused! I thought I would mention it.

Assuming both APX 400 and Kentmere 400 are the same emulsion I chose to buy Kentmere as it was slightly cheaper online.

For my first roll of Kentmere film I did some Kentmere 400 street photography or photography in the street to be more precise. Here are a some more film scans from that same roll. They are nothing special but it gives some real examples of this film in use under very mixed lighting conditions (harsh shadows and highlights).

It is probably worth mentioning but for the photos shared above I shot the film both over exposed and under exposed. Sadly from a scientific point of view I was just winging it on the day and guessed the exposure. What I can say is some images were shot in very under exposed conditions with the light being probably -2 stops under.

From how I developed this film I would say the film performed better under exposed vs. over exposed. You can decide for yourself from the images above. I don’t think I lost too much highlight detail but the shadow performance was particularly impressive.

Film shot at box speed then pushed in developing?

There are different ways to over expose film. A common way if you lab develop your film is to meter the film in camera at say ISO 200 and then ask you lab to develop the film as normal. For Kentmere 400 this would be at ISO 400 giving a +1 stop over exposure (as you metered at ISo 200)(thereby giving the camera +1 stops of extra light on each image).

As I develop my own film I shoot it at box speed (meaning if the box says ISO 400 I meter at ISO 400 (or guess ISO 400 or just be aware the camera is expecting ISO 400). If I know that there was insufficient light when I took the photos and I really needed ISO 800 or ISO 1600 I make a note.

When it comes to developing the film my notes would say Kentmere 400@800-1600. I then pushed the Kentmere 400 film 1-2 stops in developing by just extending the developing time. Black and white film has such wide latitude that I’m very relaxed with this process and there is no hard/ fixed rule. I just leave the film in the developer a few minutes longer and it always seems to work.

Equally if I was shooting say a Leica M film camera on a sunny day the opposite would apply. The maximum shutter speed on a Leica M3 for example is 1/1000. If I had Kentmere 400 film loaded at was shooting at wider apertures my film maybe over exposed by 1-2 stops. In this situation I may write Kentmere 400@200 or 100.

In summary the film scans looked a lot brighter than reality. That being, what I saw with my eyes at the time of taking the photo, to the extent that I probably pushed Kentmere 400 +1 /+2 stops in developing. The last image in the photo gallery above is the perfect example – the train window. It was dark outside yet light inside the train yet look at the brightness in the sky captured in the photo! A fantastic effort from the Kentmere 400 film stock, basically turning night into day!

For reference, I developed the roll of Kentmere 400 (and Ilford Pan 400) from this film test in my usual soup of Xtol and Rodinal film developers. I’ve used this developing mix for so long it is as much of a safety blanket for me when it comes to film developing. My results may look very similar to when using Xtol developer alone but I feel Rodinal can add increased sharpness. You may find these links of interest –

So to back track a little..

After buying a 10 pack of both Kentmere 400 and Ilford Pan 400 films I was keen to see how these two films compared. Both emulsions are made by Ilford and both are 35mm 400 speed black and white film. Time for a Ilford Pan 400 vs Kentmere 400 review / shoot out comparison test!

The film test. I took one roll of each film for a day of photos in London. My camera of choice was the Voigtlander Bessa L + Voigtlander 15mm f4.5 Super Wide Heliar. Here is some footage from making the some of the photos shared in this article.

After exposing my first roll of each film I would say the Ilford Pan 400 is worth paying the very slightly higher price tag. To my eyes anyway. I’m not a pixel peeper but Pan 400 just looker ‘better’ or at worst no different to Kentmere. Both Kentmere 400 and Ilford Pan 400 films perform great and I have no complaints with either. I just think Pan 400 has that edge for my taste. That being, slightly sharper or with higher resolution from my test. You can decide for yourself from the sample images I share.

My conclusion findings is very much as expected after using Kentmere 100 and Ilford Pan 100 films before. Pan 100 is an awesome film that is well worth trying if you can get it and Kentmere 100 is fine to use too.

Kentmere 400 is a very usable emulsion that I will be happy to use it if I need 35mm 400 speed black and white film. The film latitude and especially the shadow detail is fantastic and the grain is not too over powering. Kentmere is very easy to develop, as claimed, and the price is good for a 400 speed film.

Yes Kentmere 400 is no match for the amazing Kodak TMax 400 film. TMax 400 is the benchmark test for me for 400 speed 35mm film. (Ilford XP2 Super 400 is also a fine detail 400 speed B&W film but this is a C41 film). In terms of sharpness and resolution there is no contest, Kodak TMax is the clear winner. Kentmere 400 vs TMax 400 is like comparing apples to oranges (as they say). These are very different films in most aspects and Kentmere is almost half the cost of TMax.

Kentmere offers a more classic look from being less perfect (vs. TMax), having more visible grain and lower contrast. Kodak TMax 400 is very modern and smooth looking from the fine T-grain structure. T-Max 400 is the best 400 speed film, especially in 35mm film format in terms of resolving power and look for my taste. That said TMax is so perfect it can look almost digital especially in 120 film format. I do quite like the classic look of film photography so Kentmere 400 will suit my needs in many instances and especially for low light.

Once I have shot my 3rd, 4th, 5th roll of Kentmere 400 I will embed more sample photos. I’m keen to try some more portraits and try experimenting with this film pushed +2 and +3 stops especially (in a controlled environment!).

Where to buy Kentmere 400 film stock

You can now buy 35mm Kentmere film in the UK and Europe too. As mentioned, originally it was only available in the US.

A sample of other black and white film reviews