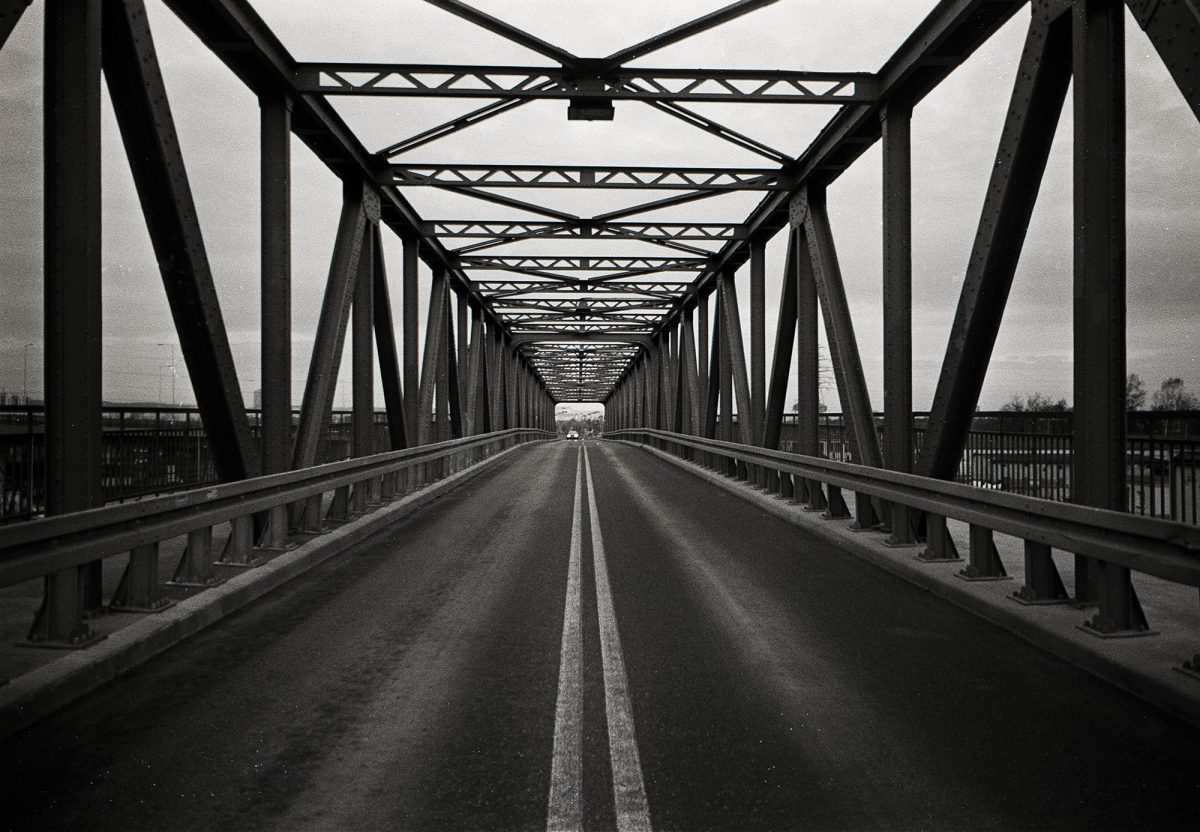 Ilford Pan 400 film is said to be a reasonably fine grain emulsion with good sharpness and contrast. As the name suggests it is a panchromatic film (like most film stocks) which has good latitude and is easy to develop. Like with Kentmere 400 film Ilford Pan 400 is a budget black and white film priced lower than the other Ilford branded films. It is a cheap alternative to 400 speed films such as Ilford HP5, Ilford Delta 400 or Kodak TMax 400.

Ilford sells two Ilford “Pan” branded films. Those are Ilford Pan 400, as reviewed here and also it’s sibling, the amazing Ilford Pan 100. After I discovered the Pan 100 film it was instant love! I would compare it to Kodak TMax 100 film with it’s fine grain, good sharpness and strong contrast.

Here are some edited Ilford Pan 400 street photography images from my first roll. The film did all I asked. No complaints at all! (See below for more examples).

As with my Kentmere 400 review, for my first roll of Ilford Pan 400 I tried some street photography (or photography in the street). Here are a few more film scans from that roll. Nothing special, I just wanted to finish one roll of each film that days so I photographed anything that caught my eye.

After buying a 10 pack of both Ilford Pan 400 film and Kentmere 400 film I was keen to see how each compared. Both films are manufactured by Ilford and both are 35mm 400 speed black and white budget-priced film. To complicate it further, the latest box design now calls Kentmere 400 “Pan 400”! Time for a Ilford Pan 400 vs Kentmere review / shoot out comparison test.

So if you have already seen the Kentmere 400 article I took one roll of each film for a day of photos in London. My camera of choice was the Voigtlander Bessa L + Voigtlander 15mm f4.5 Super Wide Heliar. Here is some footage from making the some of the photos shared in this article.

After exposing my first roll of each film I would say the Ilford Pan 400 is worth paying the very slightly higher price tag (vs. Kentmere). To my eyes anyway. I’m not a pixel peeper but Pan 400 just looks ‘better’ or at worst no different. Both Kentmere 400 and Ilford Pan 400 films perform great and I have no concerns but I think Pan 400 has that edge. Pan 400 looks slightly sharper or with higher resolution from my test. You can decide for yourself from the sample images I share.

My conclusion findings is very much as expected after using Kentmere 100 and Ilford Pan 100 films before. Pan 100 is an awesome film that is well worth trying and Kentmere 100 is nice too.

Shooting more Ilford Pan 400 on a run in Poland

Each morning during my Poland trips I get up early and out for a run (and explore) before breakfast. It works well for me to see more of the area before the models start to arrive. I was running with different cameras (YouTube video to follow on that) but on this day I had the Voigtlander Bessa L with me again.

The Voigtlander Bessa L is an unusual camera in that there is no viewfinder or rangefinder. I just love that it is so lightweight it is perfect for my needs when running. For this run I used the lesser known and probably even more less popular lens, the Soviet Orion-15 28mm f6 lens. (I need to review this too!) Why this lens? Because it too is crazy light weight (and also I like to experiment!) I used a cheap and broken 28mm hotshoe viewinder taped together to give me an approximate composition but I later wished it was more precise. (I will get a proper 28mm finder for next time). To focus I guessed (often badly) via hyperfocal distance. Looking at the images in some photos I forgot to adjust focus but it adds to the imperfect vintage look I guess.

So this is a series of images as they unfolded as I discovered this cool place. It was around 7:30am on a Sunday and strangely empty. There were security cameras on every post but no people, just me (dressed like a weird keeno runner in leggings and my ultra bandana). I’m guessing I was easy to see and after I got onto the road I realised I was being followed by an unmarked car. After a bit I think they realised I was a harmless weirdo tourist and moved on / I think I turned off and ran away from his area (heading towards the power plant).

Then I got lucky..

Lucky to me is like yawn to most people but I loved it! So in the sequence of frames below you see me photo the building with the power plant behind. Next I cross the new bridge and see the loco beneath and then the wagons on the tracks. After this I run further to the plant in the distance. Once I get there I see a loco pulling the same log wagons into the power plant. It’s not a sight I see in the UK and I like the idea of documenting some history. (Before we have a clean green planet and this is all gone). I fired off more shots then crossed the bridge to see the train with the power plant back lit by the sun. My compositions were poor as I was guessing but I love the last photo especially (the edit). What a great morning! (I need to cancel all models one day and then I will have time to run further/ longer and discover more new cool stuff. I’m usually limited to around 3 hours tops before the first model starts.

As with most my photos I only have time to edit like 1% of them so the first and last image shared below are edits and the rest are just scans cropped and aligned in Lightroom. I might edit a few more for Flickr at a later date like the bridge shot (shot in the road). I love a good bridge!

Don’t worry after all these ‘boring’ street and exploring photos I shot some portraits too! Sadly I’ve not had time to edit many yet but check back soon and I’ll keep adding them in here.

Here is my first Ilford Pan 400 portrait and I’m loving the look of this film (or maybe it’s the look of the model!). No but seriously this film is good and well worth trying if you can find it. I shot a few portraits in Poland with Kentmere 400 film too and I prefer the fine grain and contrast of Pan 400.

So to summarise, if you read my Kentmere 400 review my first impressions are nearly identical to as stated there. Kentmere 400 is a good film but if I have the choice of both films at similar prices I will buy 35mm Ilford Pan 400.

As with Kentmere… from seeing the results of Ilford Pan 400 film I can say that I will be happy to use it as my new go to 400 speed black and white film. As already stated I love the tone, the fine grain, the contrast. To me it reminds me of Kodak TMax but with a slightly more classic look (from less resolution and detail I think). Ilford Pan 400 is easy to develop and no different to Kentmere 400 in that regard. Pan 400 is slightly more expensive vs. Kentmere but the price is still reasonable for a 400 speed film.

Where to buy Ilford Pan 400 film