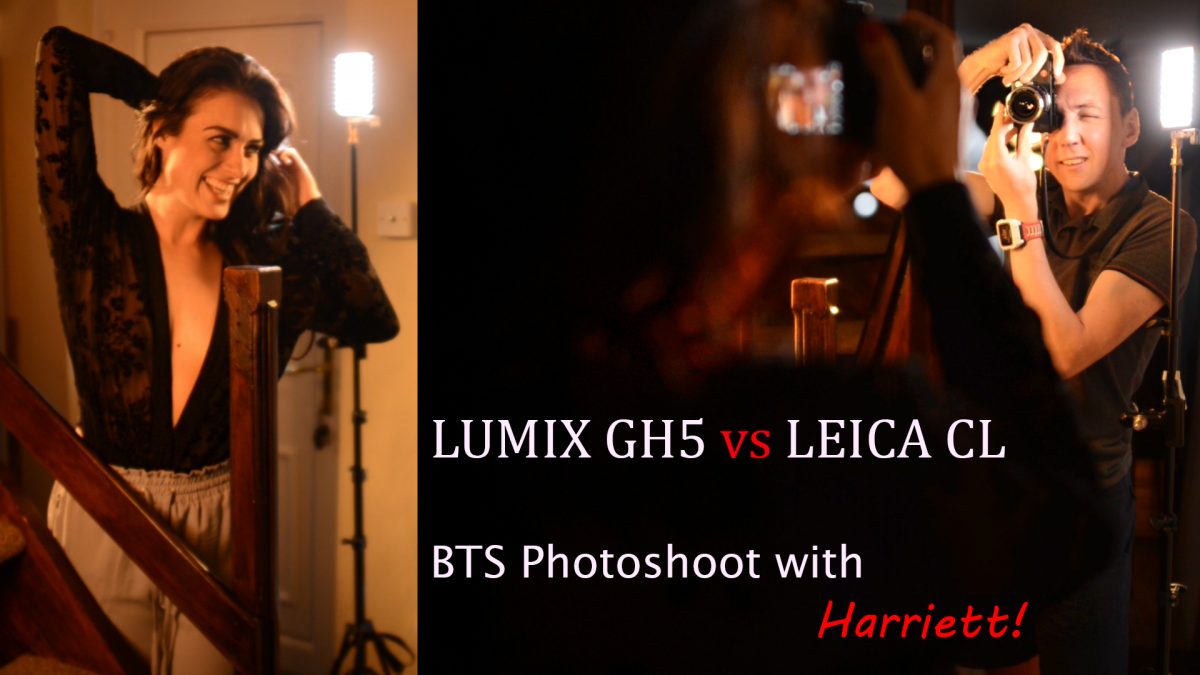 After buying a Panasonic Lumix GH5 digital camera for YouTube vlogging (see Lumix GH5 Vlogging Camera) I thought I would try the GH5 for photos too. Below are a series of comparison photos using the new Lumix GH5 vs Leica CL during a photo shoot with Harriett. (See the BTS YouTube video linked below to see how I made the images).

My photoshoot with Harriett had been planned long before I bought the Lumix GH5 camera. I was keen to try out the new camera for some Lumix GH5 portraits and also to see how it compared to the Leica CL. The Leica CL is my current most used digital camera which I now use more than my Leica M240.

Enjoyable photoshoot not a lab experiment

As the photoshoot had my usual goal of have fun and make the best possible photos I didn’t restrict myself with specifics. By this I mean if it was a true camera test of say photographing a test chart I would have the camera on the tripod, use one lens, take a photo, switch to second camera on same tripod, same lens, take photo. When I use multiple cameras during a photo session I use them side by side with different lenses in different positions and angles.

So what’s the point?

So what a pointless comparison test you say. Well to me the test is regardless of the lens used, the angle or the lighting. If I like the final photos then the new camera passed the test. If I struggle to tell the difference between the Leica CL images and the Lumix GH5 photos in this scenario then again the GH5 camera passed.

The Lumix GH5 did pass!

I edited the batches of RAW file images from both cameras independently in Adobe Lightroom. Why separately? I needed to develop a new Lumix GH5 Lightroom preset first to apply a look I desired to the GH5 images. For the Leica CL I already have Leic Lightroom Presets that I could apply to these photos.

While editing the photos I struggled to tell which pictures were from what camera. This is a great sign for the Lumix as potentially you may expect ‘better’ results from a more expensive Leica camera.

In the past I tried a Lumix G3 camera (and a Lumix G1) and although it was fun for a while the photos we drastically different to those from a digital Leica camera. At the time I was using a Leica M9 as my main camera. Some digital cameras produce very digital looking images to my eyes. As a film photographer I probably dislike this aspect of an image more than most hence I stick with cameras I know I like. The older Lumix G3 created more digital looking images but the Lumix GH5 less so which is good for me.

To come clean, I was not comparing the Lumix GH5 camera with a £100 Lumix kit lens against a Leica CL camera with a £1000+ lens. That wouldn’t really be fair. As such I used both cameras as I would normally shoot them and mounted Leica M mount lenses to both the GH5 and CL (via the respective adapters).

To get the best from these crop sensor digital cameras I was using fast prime lenses. I rotated the lenses I was using between the two cameras. As the Lumix GH5 has a 2x crop sensor I used the wider Voigtlander Nokton 35mm f1.2 ASPH lens on that camera body the most. For the Leica CL I used the Leica Summilux ASPH 50mm f1.4 lens (and a Leica Summicron 50mm f2 lens ). (I also had a Leica M6 out to get some film photos so if the Summilux 50mm ASPH was on that then the Summicron was on the CL).

All photos were taken with the lenses shot wide open at their widest aperture, either f1.2, f1.4 or f2. The more expensive Leica Summilux 50mm f1.4 ASPH is sharper wide open from my experience of using it on different Leica cameras, film and digital. The Voigtlander 35mm f1.2 is a good lens too and noticeably sharper than it’s smaller cheaper siblings, the Voigtlander Nokton 35mm f1.4 lens and Voigtlander Nokton 40mm f1.4 lens.

I chose to use fast prime lenses on the crop sensor Lumix GH5 and Leica CL to help create the shallow depth of field. It is a constant debate online about bigger sensors are best and bigger sensors give a greater shallow depth of field. For me if i’m working at the same distance from a model with full frame cameras and crop sensor cameras (and medium format film/ large format film) and the same focal length lenses (often 50mm) I chose the wide aperture lenses over slower lenses for portraits.

Distance from subject does matter

One disadvantage of using Leica Lenses on a micro four thirds camera is the focus ring on most Leica lenses only goes as close as 0.7m and older lenses at 1m. The Leica Noctilux 50mm f1.0 lens is not an ideal lens on the Lumix GH5 as it has a 1m minimum focus distance. The Leica Summilux 50mm f1.4 ASPH will focus to 0.7m so a little better. The perhaps over overlooked fact about the Voigtlander 35mm f1.2 lens is it will focus to 0.5m. This is a game changer on the Leica CL and now the Lumix GH5. Getting close with a f1.2 lens gives nice shallow depth portraits which I like.

Unlike the Leica mount lenses, with Nikon Mount lenses you can often focus as close as 0.3-0.5m on some lenses. This is the same for M42 mount lenses. For this reason if you plan to do close up photography it is worth considering what lens brand is best for the job.

It is still early days for me testing my Lumix GH5 so I have not used the camera with other brand lenses yet (via micro four third lens adapters). I will share results of this in the future.

When comparing the Lumix GH5 vs Leica CL during this photo shoot I was pleasantly impressed at the photos from the GH5. I will certainly do more model shoots with the Panasonic Lumix and share the results. The GH5 wont replace the simplicity and quality of a Leica camera but it’s good to know that I will be happy to use the Lumix GH5 for both video and photos.

Here are a selection of Lumix GH5 portraits from the photo shoot. All photos are Lightroom batch edited images with a Lumix LR preset applied –

Leica CL portraits (as a comparison to GH5)

To give something to compare to here are a series of similar photos shot during the same photoshoot with the Leica CL camera. All photos are Lightroom batch edited images with a Leica preset applied –